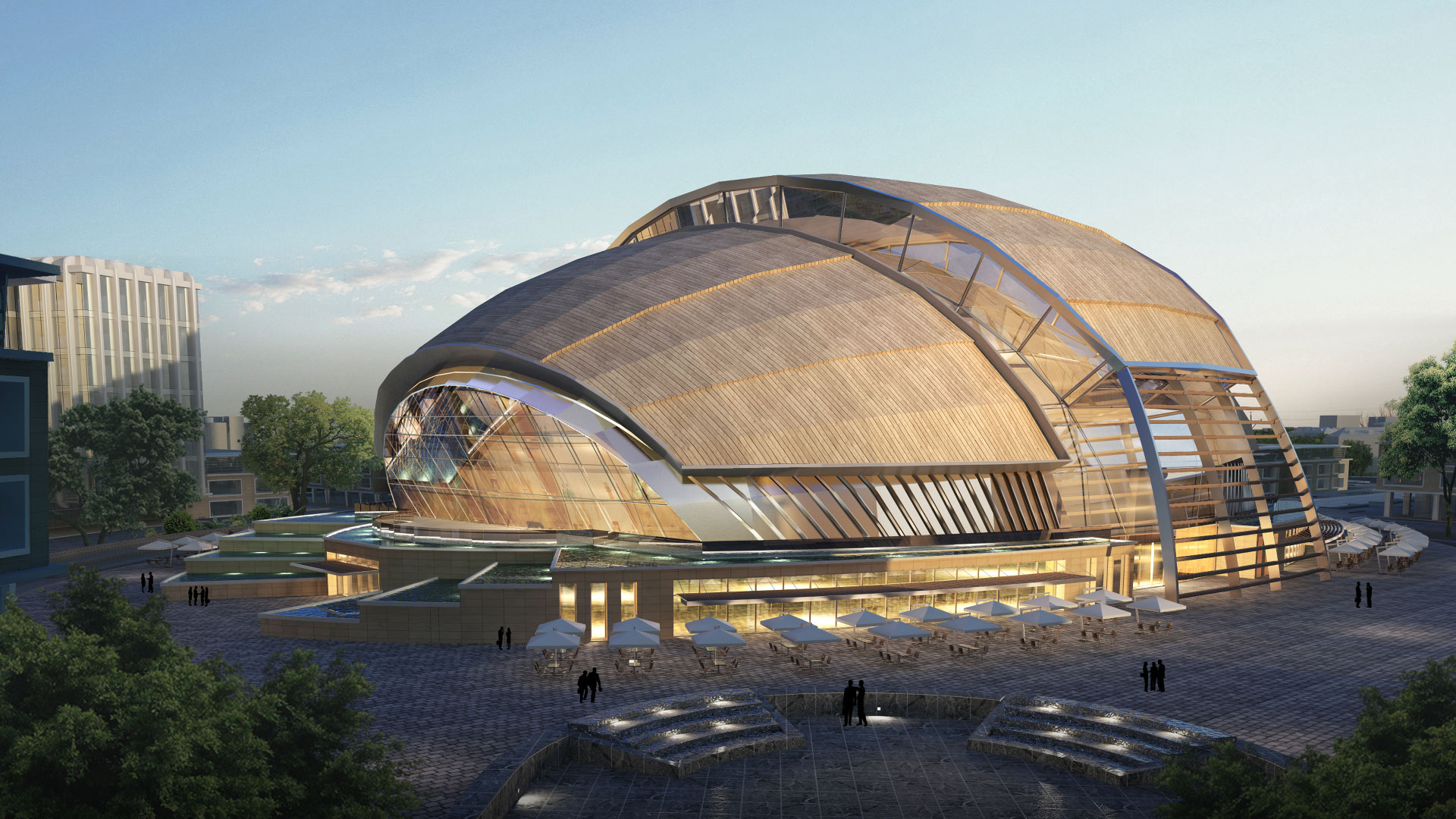 
Wine consumption in China has been steadily increasing since 1990. Although it still constitutes a relatively small percentage of alcohol consumption, it is expected to continue to grow, along with an increase in local production.

Shandong Province is the largest wine growing region at the moment in China, so the port city of Yantai ─ already a centre for wine, hosting Expos and an International Wine Festival ─ was chosen as the site of a Wine City, a hub for the nascent wine industry to bring buyers and sellers together and to generally celebrate wine and its many cultural functions.

MDL was asked to prepare a master plan for the 950,400 m² site (hosting a bonded warehouse, wholesale centre, retail area, exhibition and convention centre and residential towers) and a design for the 30,000 m " ² Wine Museum which would be the centrepiece of the Wine City.
The City has centric organisation with the arteries all leading to the Wine Museum at its heart, giving the Museum an iconic presence. The formal idea of the building is the traditional timber wine barrel. This offered a strong and readily recognisable visual metaphor, but also carried symbolic force, since the wine barrel is where the fermentation process takes place, where the wine matures and is eventually stored ─ thus communicating the function of the Museum to nurture the production and appreciation of wine in China.

The barrel is segmented both in elevation and in plan. The barrel is sliced in half, with the bottom half then sliced again. The bottom slice provides for a podium with a high degree of porosity, while the upper slice of the barrel forms the main volume of the building. The elevation of this volume is in turn sliced into three parts. The central part is lifted up like a canopy partially covering the front and rear parts with highlight glazing drawing natural light into the centre of the building. The semicircular front and rear parts are tilted forward to provide shading for their fully glazed façades. This helps give the building a dynamic character, one without a front or back, but a series of unfolding tableaux. The positioning of the building at the intersection of the city’s axes (or boulevards), together with the building’s multiple entry points and overall transparency make it a focal point, drawing visitors to it, as though attracted to a dramatic spectacle ─ enhanced by the semi-circular cuts with their grand steps down to the basement entries. Although there are other entries on the long elevations of the building at the plaza level, these basement entries are the key entries, providing easy access for people to all the other levels of the building. Apart from being a drop-off point for visitors, the basement will also feature a traditional cellar, a small production line showing the bottling and corking, and the stamping of the bottles, along with a tasting area.

The architects point out that the museum “is actually surging out of a suspended pool”, which is tiled in a variety of reddish hues, so that when the water flows around this “giant fountain” there is the suggestion of flowing red wine. This is just one gesture in a grand dramatic strategy, making the museum and its surrounding plaza the centre of a new city whose identity derives from the culture of wine.

The Yantai Wine Museum occupies a special place in the history of MDL because it was one of the practice’s earliest projects and one which signaled the importance of embedded symbolism in the work of MDL.