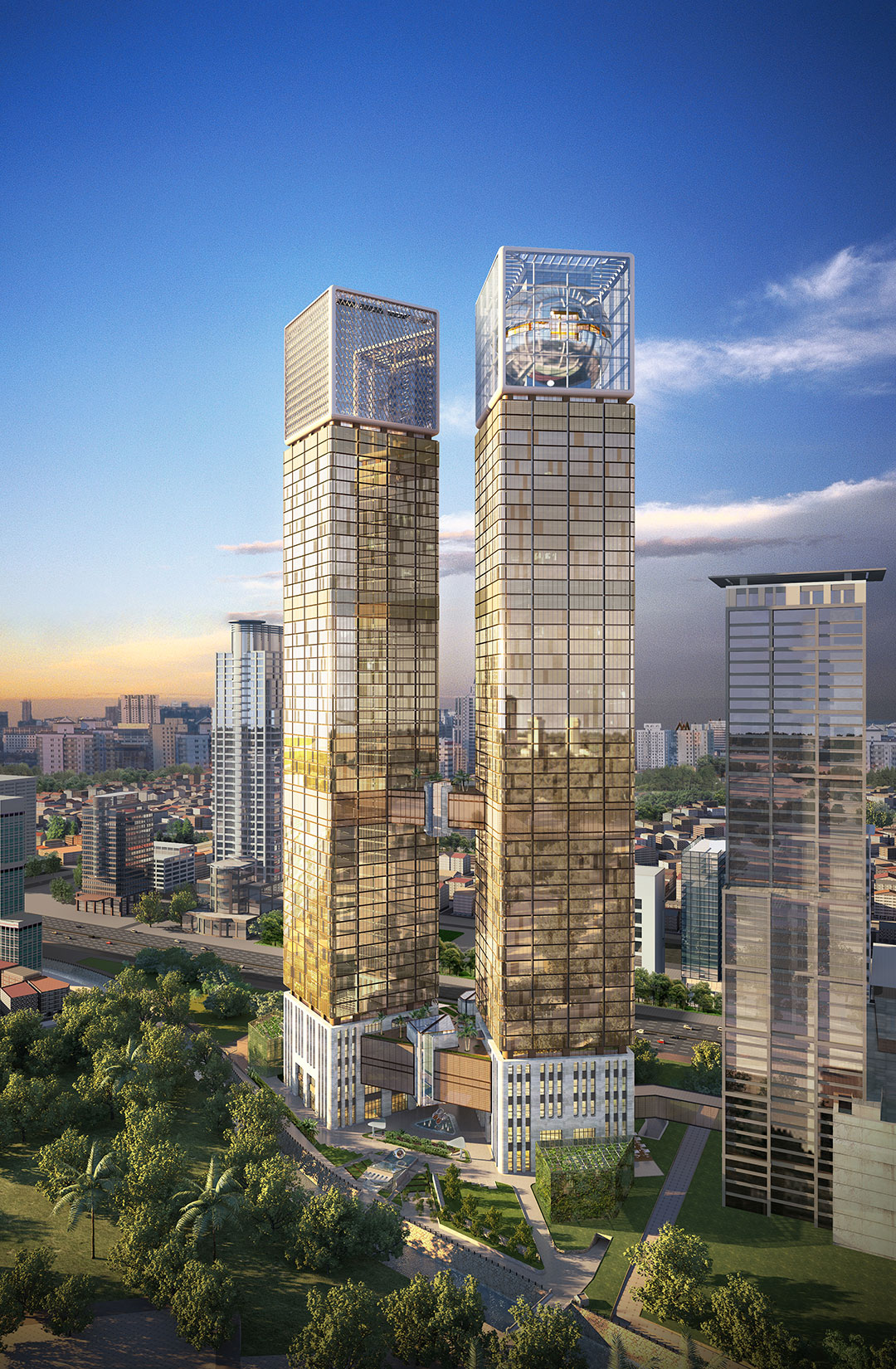 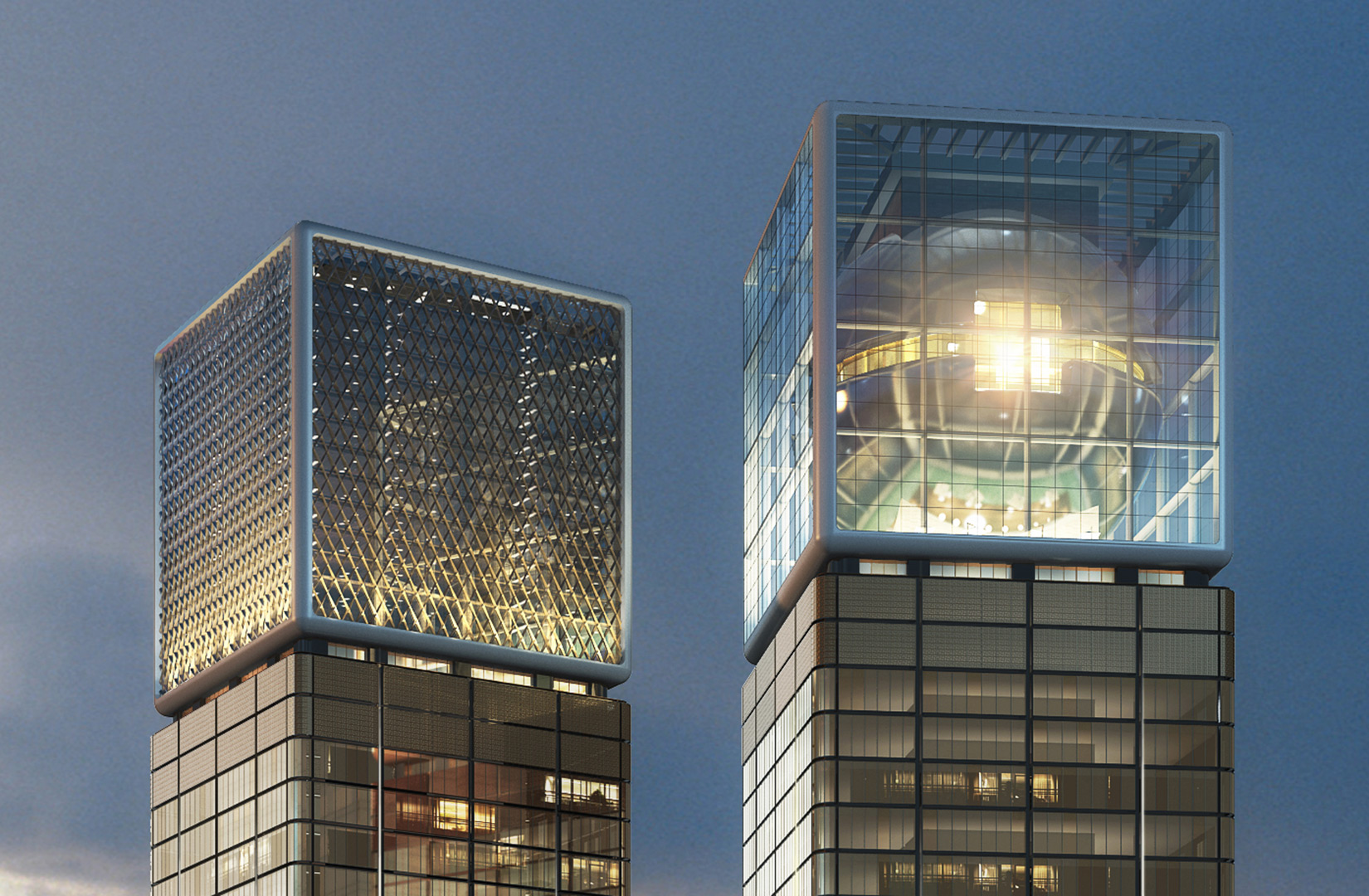 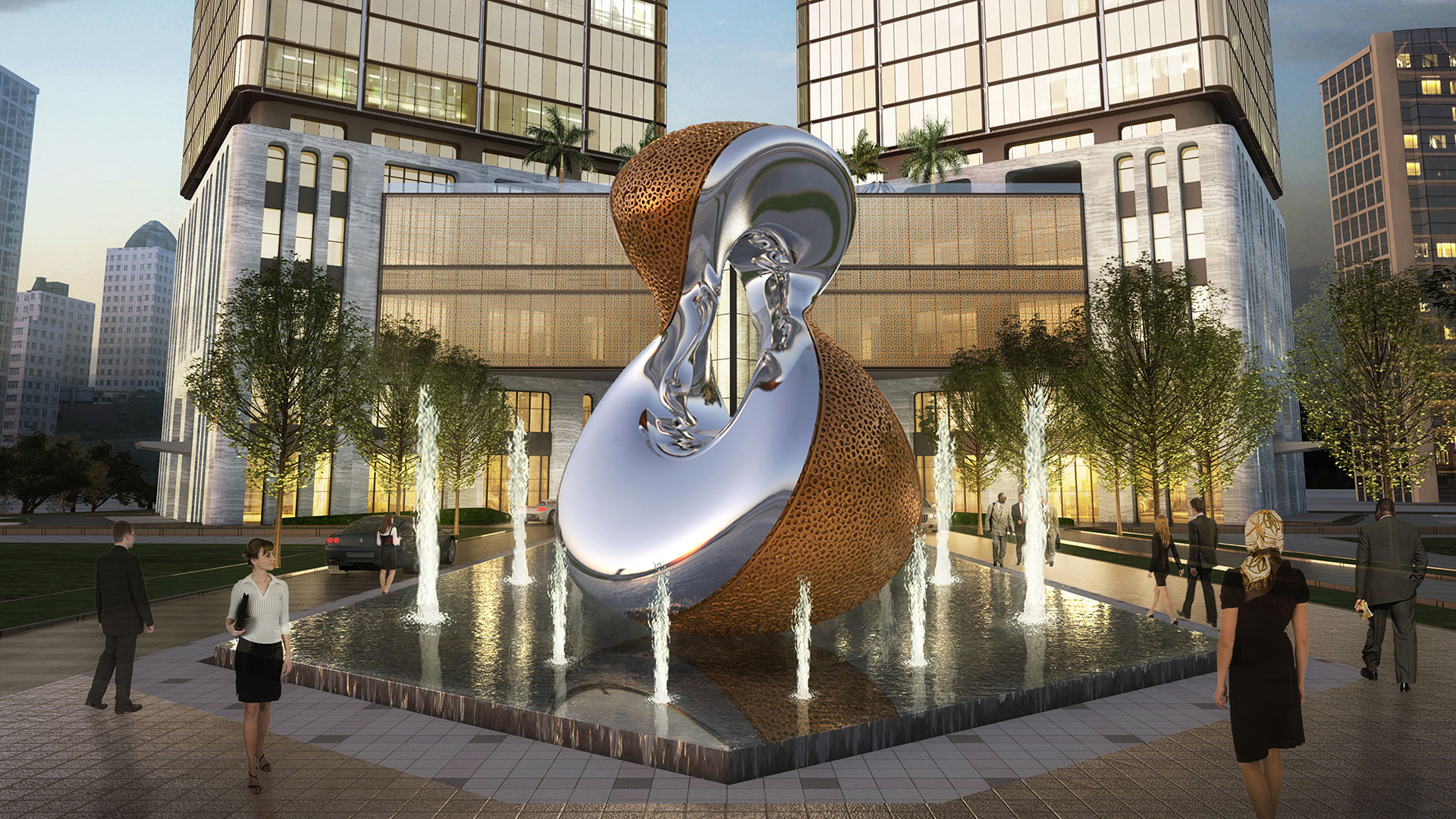 
The site for this 54-storey high-rise mixed use (but primarily commercial) development is behind the Hyatt Hotel in central Jakarta, on a main road and close to a canal. This was a project which was started, then paused, since the site was occupied by a shopping complex and the lease needed to expire before demolition and construction could begin.

The brief also shifted during this period. The client, the CEO of China Sonangol, went cool on the original idea of a ‘sexy’ building and felt that he needed something simpler and easier to maintain than the original triadic concept. He also went cool on the silvery pearly grey, originally proposedas the colour of the tower. Instead, he opted for a coppery gold colour. So, the challenge was how to create something iconic and powerfully expressive while accommodating the client’s request for a simple building. The solution lay in juxtaposing the key elements of the structure ─ the two towers, the way the podium connects them both and the subtly differing heads ─ to set up a conversation. In this way, the building becomes a constantly shifting interaction between the components rather than an inert monolithic form. The architects also paid greater attention to the detailing to imbue the building with added character, hence the rounded corner windows and edges (which also addressed a request from the Jakarta authorities to give the building some Islamic quality, the rounded edges hinting at the typical mosque form).
The two square towers were at first set at 90 degrees to one another, but later adjusted to an approximately 35 degrees offset to allow them to be within the setbacks and to accommodate an irregular shape to the site. In plan, this is visually perceived as an arrow-head with the shaft formed by the entry plaza and its greenery and water feature. But at the ground plane on approach to the building, this dramatic thrusting configuration is counter-pointed by a massive three-storey void and entrance lobby with connecting bridge ─ a countervailing, thrusting form repeated on the 18th storey by a skybridge (which acts as a stiffener, but which also offers prestige office accommodation) to create a building which seems to stand in a state of dynamic tension between two opposing forces. At the same time, it has a jewel-like quality with its grey stone base, copper tinted glazed facade and the two cubes which form boldly decorative elements at the top of the building.

The first storey and the podium (which sits 16 metres above) provide the base for the towers, with the podium forming a portal to the building entry. This podium structure is part of a strategy to give the building character, its stone materiality contrasting with the copper-tinted glass skin of the upper floors, with its recessed framing system accentuating the height of the towers. The first storey consists of a main office lobby, commercial lobby, VIP lobby, express lift lobby (to the viewing deck and restaurant in the south tower, and to the serviced apartments in the north tower) and service zone. Direct escalator access to the 2nd and 3rd storey retail and hospitality areas is located in the commercial lobby. A mezzanine level is located between the 1st and 2nd storeys which provides for a small potential commercial area in the south tower and escalator transfer to a pedestrian bridge linking to the next door Plaza Indonesia.

The other key part of the strategy consists of the two cubes which crown the tops of each of the towers. The northern cube is wrapped in a mesh screen and includes the residential component of the complex ─ nine storeys of serviced apartments, one level for reception and a penthouse on top with a helipad. The southern cube offers a view, a restaurant and private club. This is a lightweight steel and glass structure and features the CS logo as a sculptural element which interprets the company logo as a symbol of infinity, hinting eternity and hence, the longevity of the company.

The skybridge on Level 18 connects the north and south towers and is intended as premium office space, offering a double-height area and access to the roof terrace on Level 19.

The building embraces a detailed sustainable agenda and is committed to achieving the highest rating, Platinum, which is based on Singapore’s BCA Greenmark framework which includes a number of environmental impact categories, including energy and water efficiency, environmental protection, and indoor environmental quality.

This agenda starts at ground level when regulations require a minimum of 25% green space at ground level, but with an allowance of up to 40%. Extensive plantings are provided, along with a water feature which also acts as part of a grand arrival sequence. Also helping to achieve the green plot ratio are the garden roof terraces in the podium, skybridge and cubes areas. Although the irregularity of the site has placed constraints on the placing of the towers, they have nonetheless been angled to minimise heat gain. Low-E glazing has been used on the façade, while the copper tinting and LED light strip further mitigates heat gain. Water conservation measures include water harvesting and water efficient fixtures, along with grey water treatment and stormwater management.

With this building, MDL have set out to design a high-rise commercial development with ambitions to go beyond the purely functional. Without compromising its utility and economic viability, the building becomes an elegant sculptural statement, its form and material detailing an endless source of fascination.