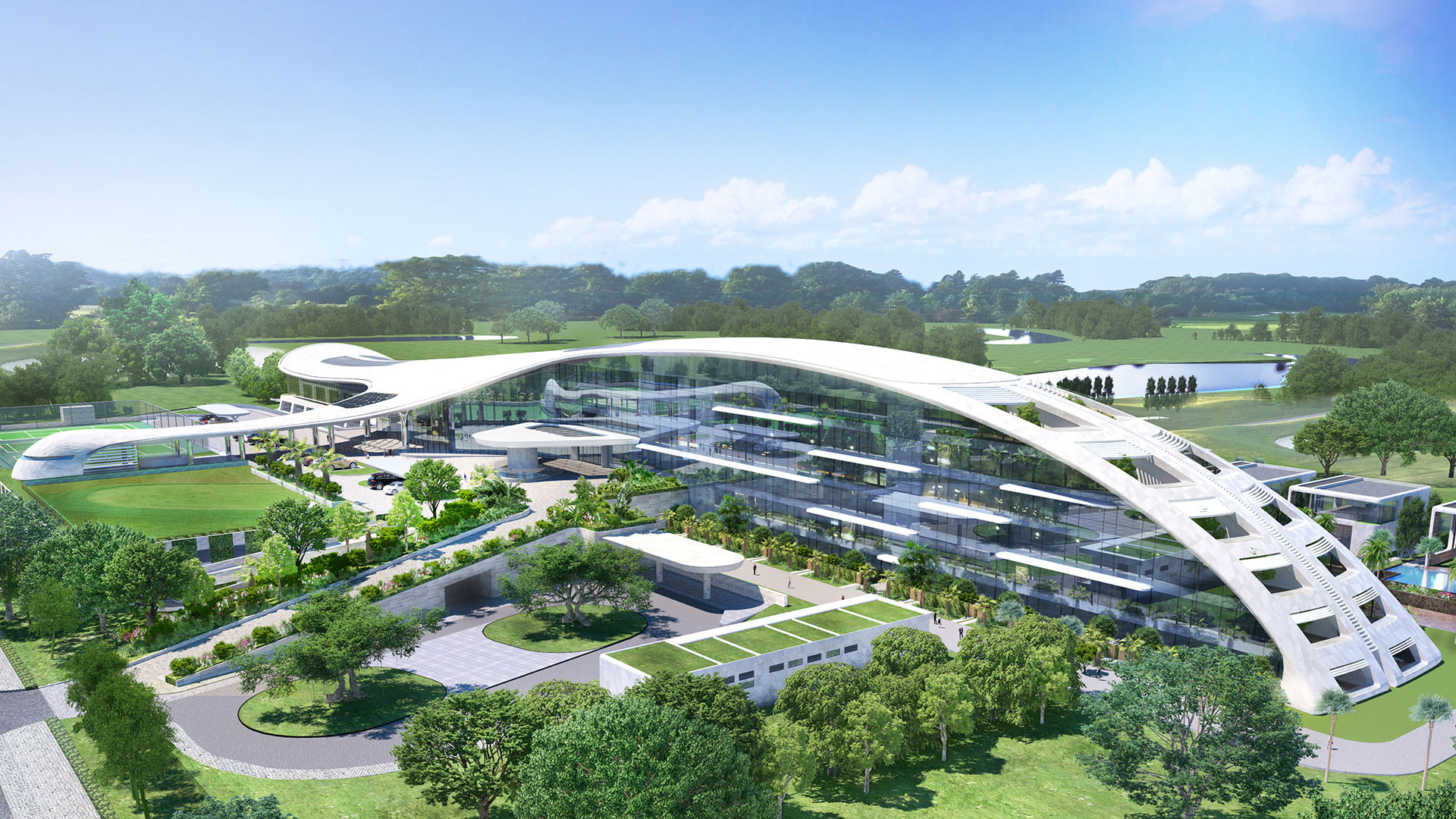 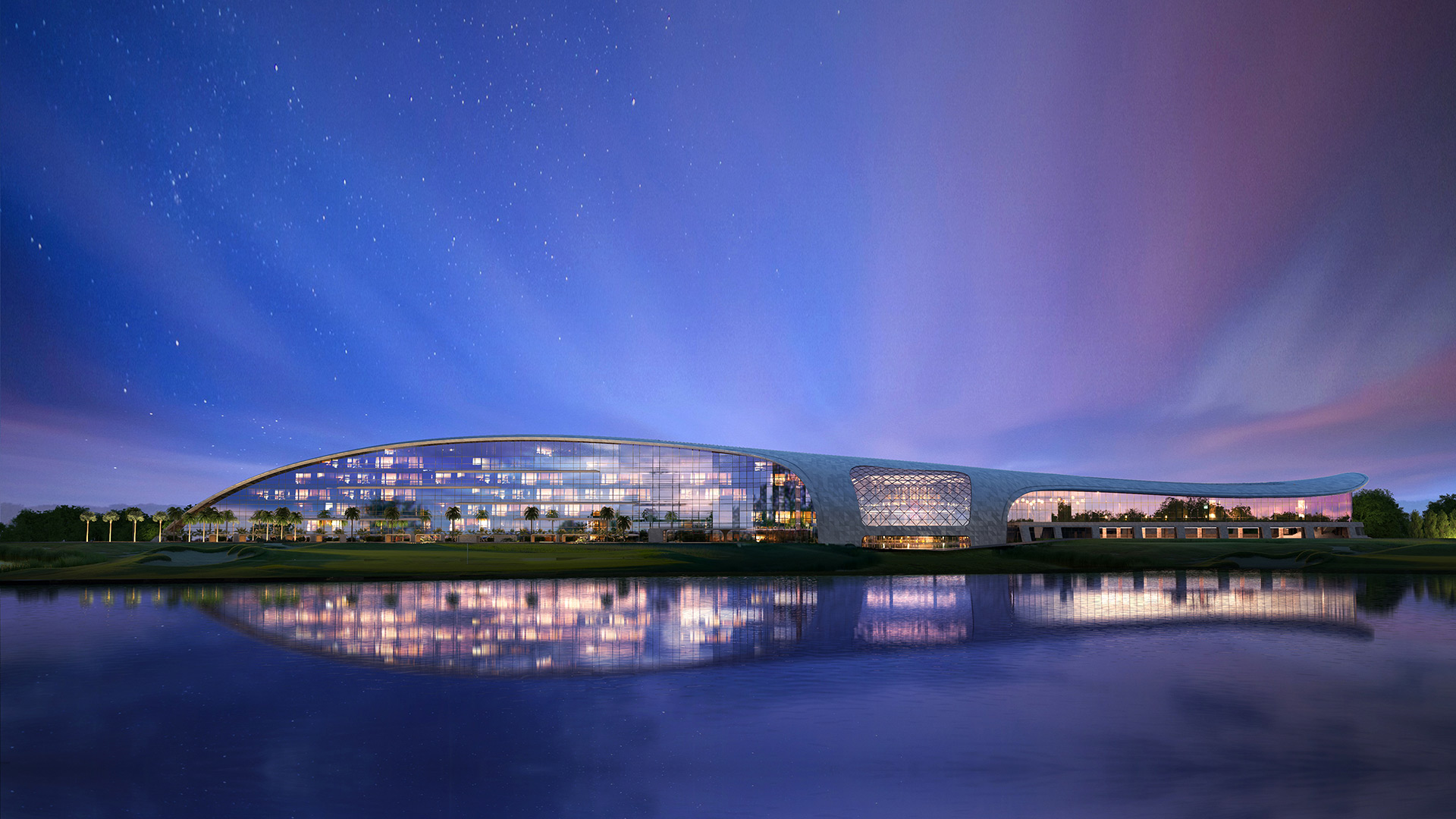 
Highly regarded worldwide, what was formerly known as the Laguna Golf and Country Club, and now the Dusit Thani Laguna, hosts international tournaments and has an American-designed course regarded as more than normally difficult with no less than four lakes, greens with surging undulations which often make the course resemble a green moonscape and clusters of sculpted sand bunkers lying in wait for even the most experienced golfer.

It was this charged image, together with the aerodynamic swing of the golf club which inspired MDL’s design for the hotel and clubhouse. The brief was for a make-over of the existing clubhouse and the provision of a new hotel. The client wanted to minimise the amount of demolition work, so the sturdy, rather traditional clubhouse with its pitched roof was to be retained but given a contemporary, largely cosmetic, refurbishment.

But then the government announced it was building a new MRT line which meant that about one third of the building had to be relocated. This proved to be fortuitous because the client then asked the architects what would they do if they were to go back to scratch and could do anything they liked. This was an opportunity to develop something far more exciting and less constrained by the “boxy-looking” existing building. The result was a dynamic, unified building ─ a single form whose image combines the uniquely surging landscape of the golf course with the powerfully graceful swing of a golf club. Although the original clubhouse was retained along with most of its functional organisation (for example, location of the golf cart storage, the golf tours starting point, locker rooms, changing rooms etc.), it is now part of a single form defined by the over-arching roof and a shared, glazed façade.

Consistent with MDL’s design philosophy, there is a unity of exterior form and internal design where the interiors express the structure of the building and reflect its curvilinear form. With the Dusit Thani Laguna, says Massimo Mercurio, “the roof makes the architecture of the building…it doesn’t just enclose the building, it also becomes the body”. It also thrusts up out of the landscape itself, sweeping up from the ground to create a shelter for the hotel before surging on to cover the existing clubhouse, splaying out in the middle to provide an entry canopy on one side and the frame for the all-day dining room and ballroom/banquet room on the other.

The two functions of the building, combining hotel and clubhouse, make it a complex proposition. The two parts are linked by a circular central volume which is accessed by a ramp which also acts as a canopy for the pre-existing carpark. This volume acts as a pivot with the refurbished golf club building and new hotel articulating off on either side as two wings. The central volume is the golf club lobby. The hotel reception is to the right of this, through the lift lobby. On arrival up the ramp, the first drop-off ─ under a skylight to draw natural light into the interior ─ is the hotel, followed by the golf club. Above the 2nd storey entry level, the hotel and club are separated by a void.

On the 3rd storey, directly above the circular entry lobby, is the banquet/ballroom space. This, says Massimo Mercurio, is the highlight of the building with its free-span vaulted ceiling, illustrating how the architects “want the structure to talk”.

The hotel rises over six levels, the club over three. The discrepancy in height ─ and the potentially awkward marriage of two buildings, one old, one new, with largely different functions ─ is disguised by the unified form of the roof which, as Massimo notes, does not just provide a shelter, but effectively a single, unified structure. Moreover, the roof form has such a distinctive aesthetic character ─ from whatever angle, both long and short elevations ─ that it takes on a life of its own, subsuming the ostensibly contradictory functions of club and hotel into a dominant and exciting sculptural form, complementing the landscape of the golf course.

The hotel, with standard rooms from the 1st storey to the 6th storey, includes a group of penthouses with private terraces cut out of the roof as it vaults up from the ground. There are also clusters of five and three villas on the golf course side of the building, each with their own elevated pool, while the original lap and leisure pools have been moved nearer the hotel. The golf club functions are located on the 1st storey (buggy charging area, lockers, gym etc.), on a mezzanine level (administration) and on the second-storey (lockers, changing rooms etc.).

Colloquially, the clubhouse has been known as “the 19th hole”, where golfers relax after a round of golf. The sense was that this was something rather detached from the course itself and the game. The Dusit Thani Laguna represents a new model, one which combines different functions and one in which the course and the facilities form a unity.