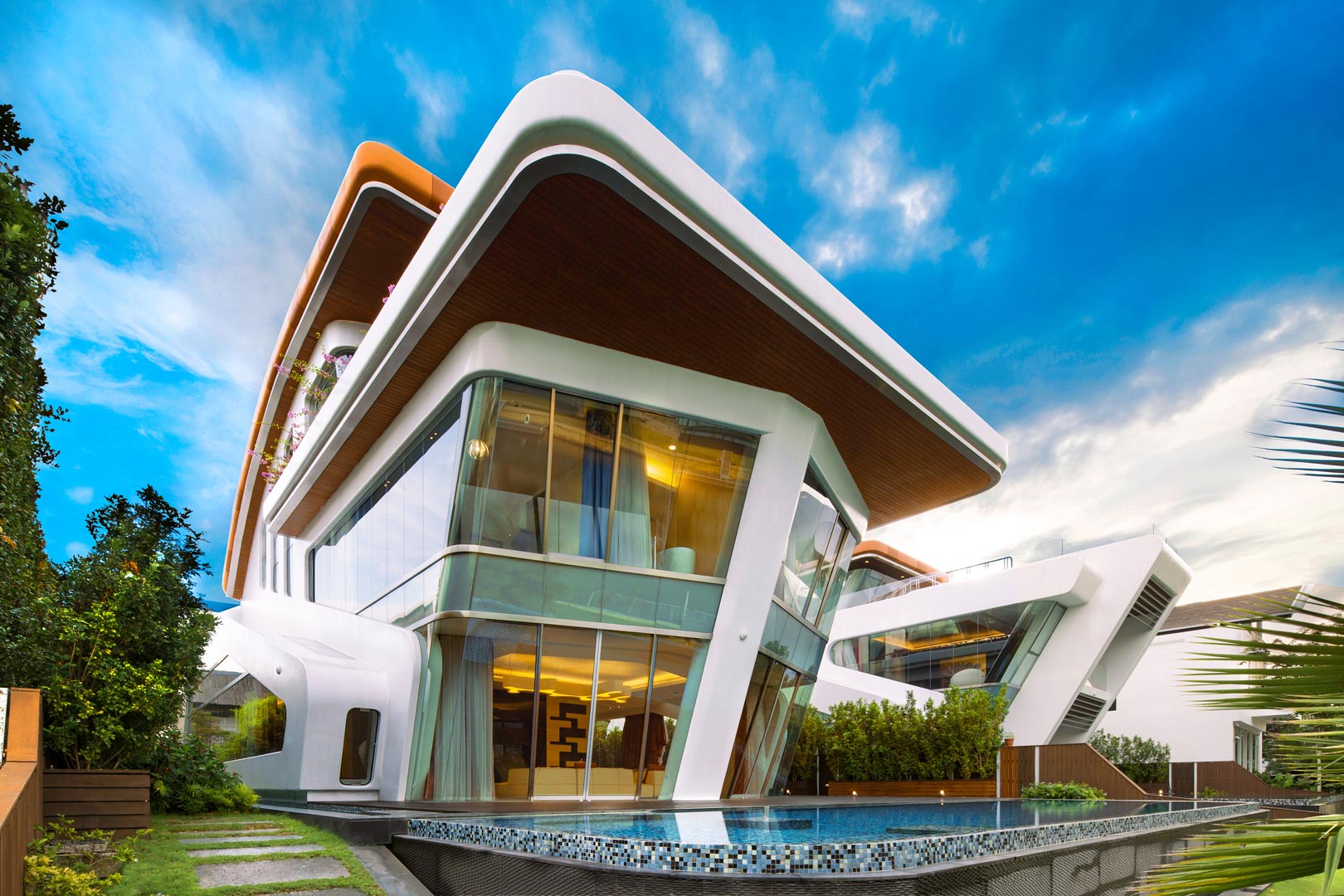 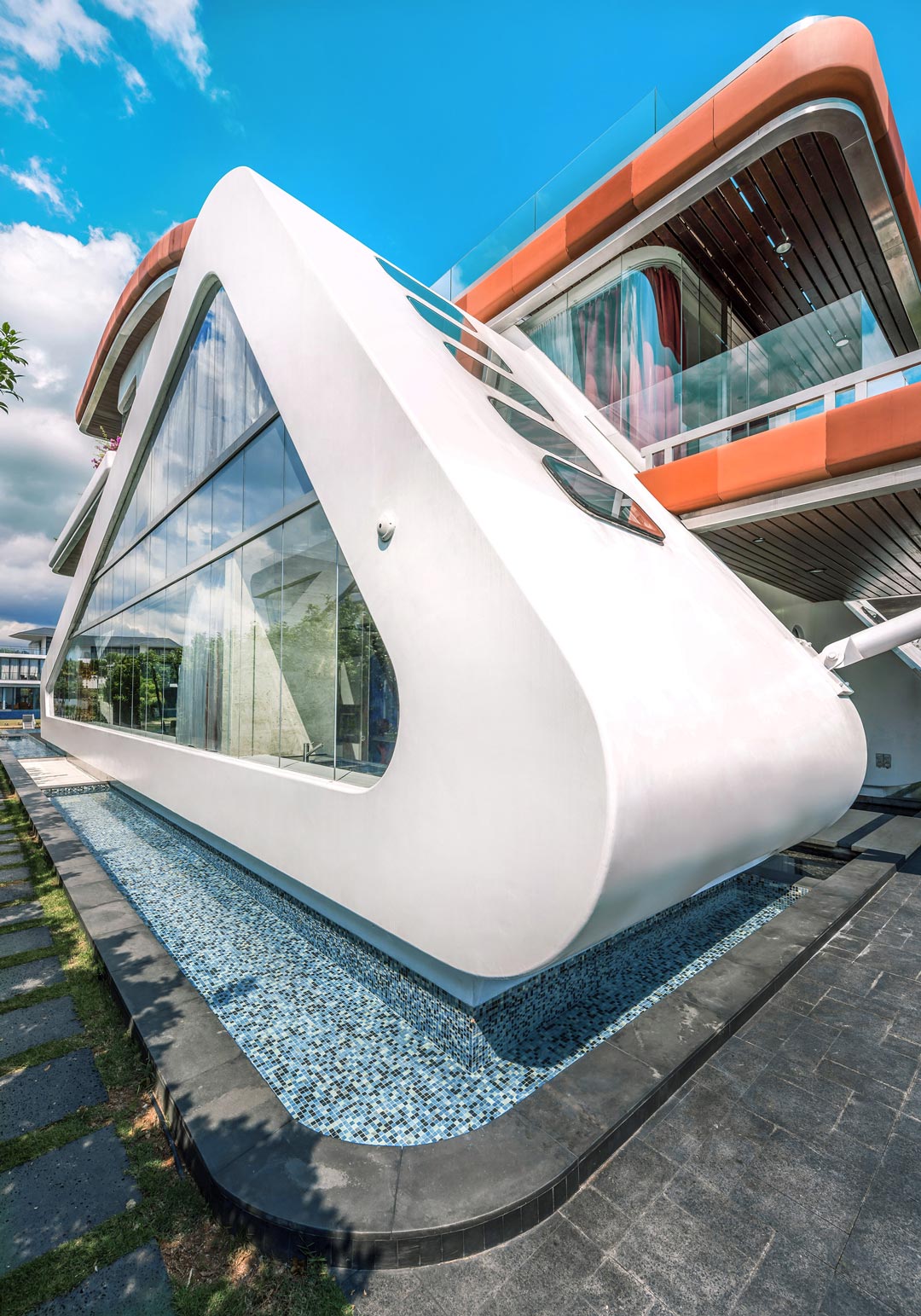 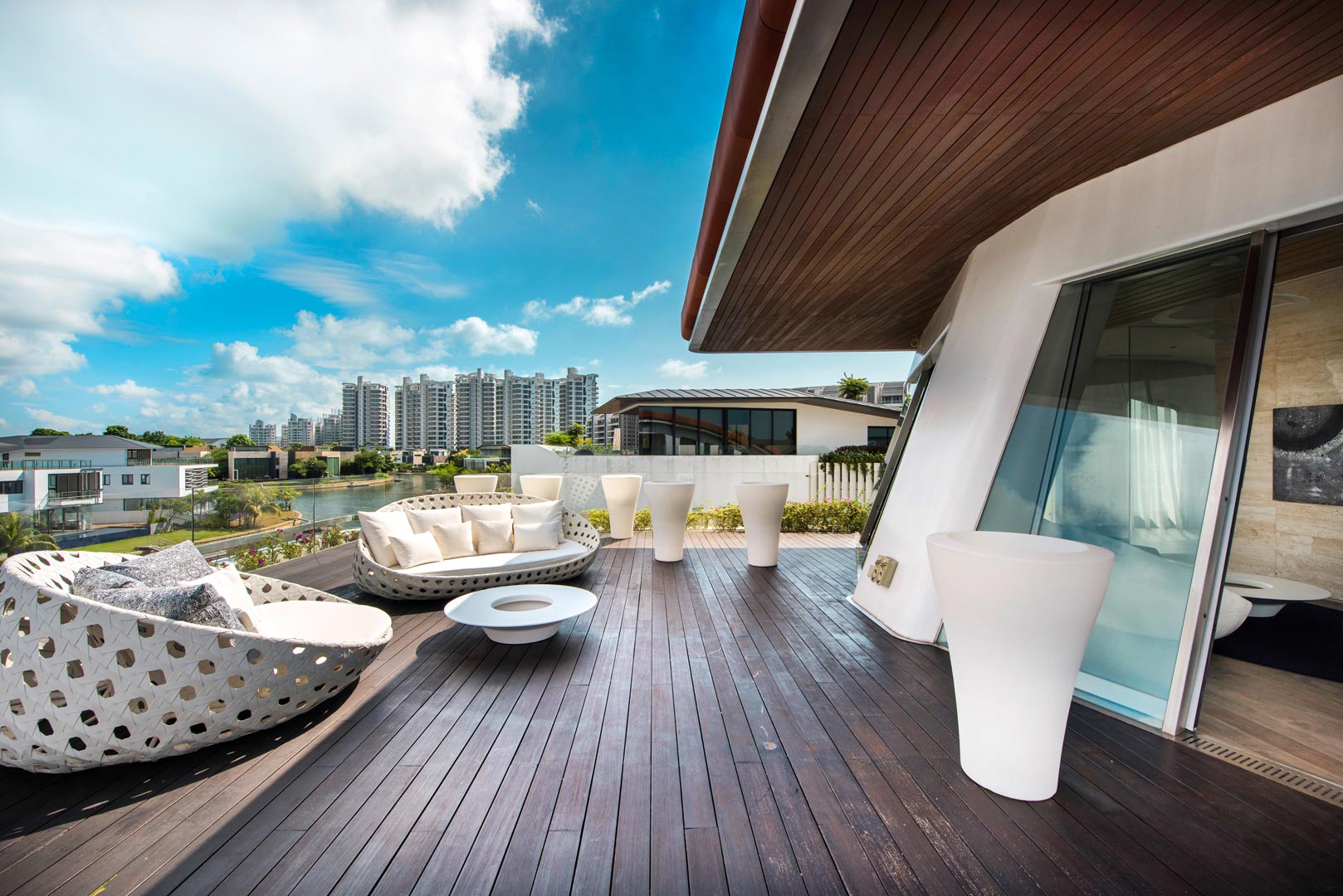 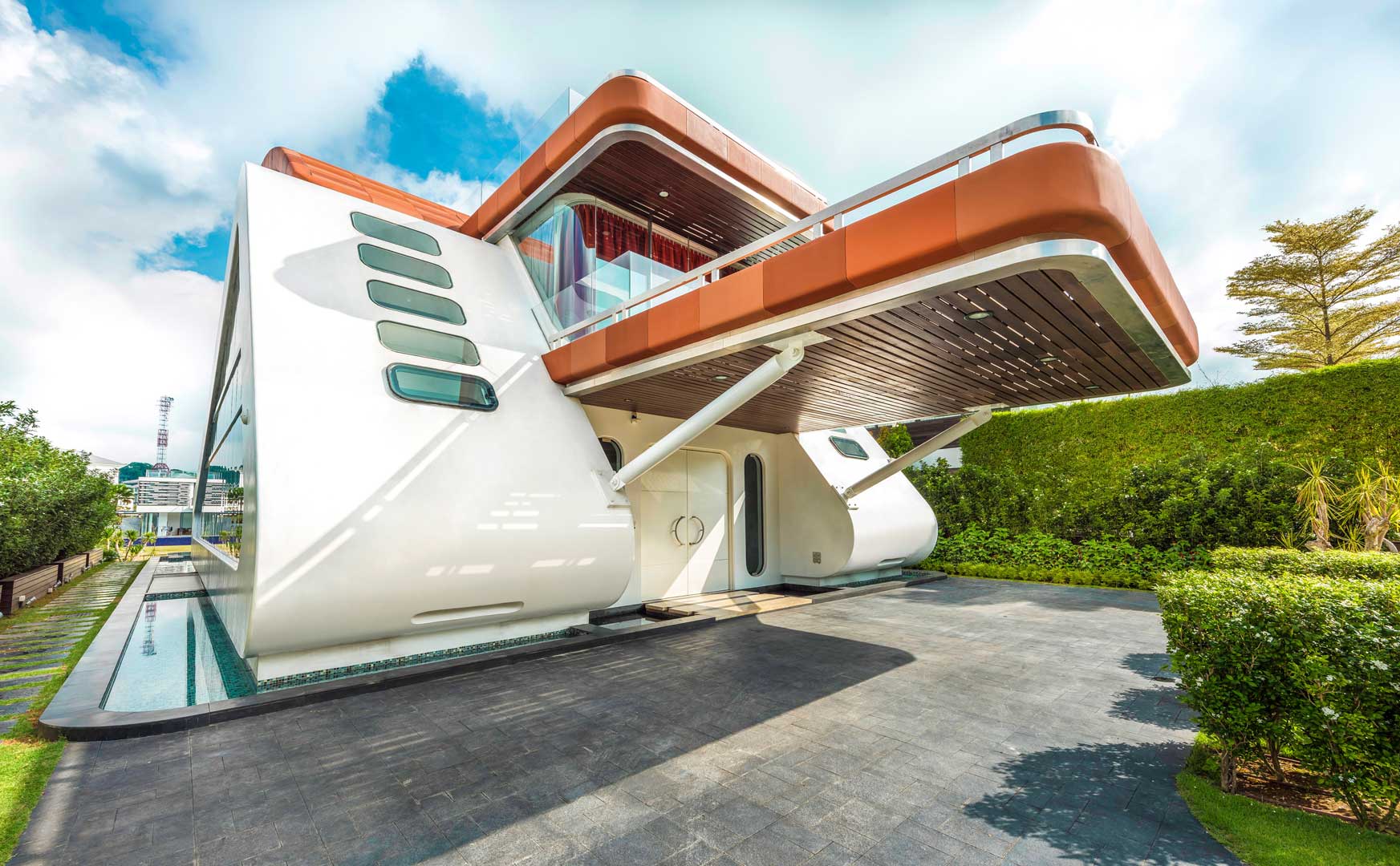 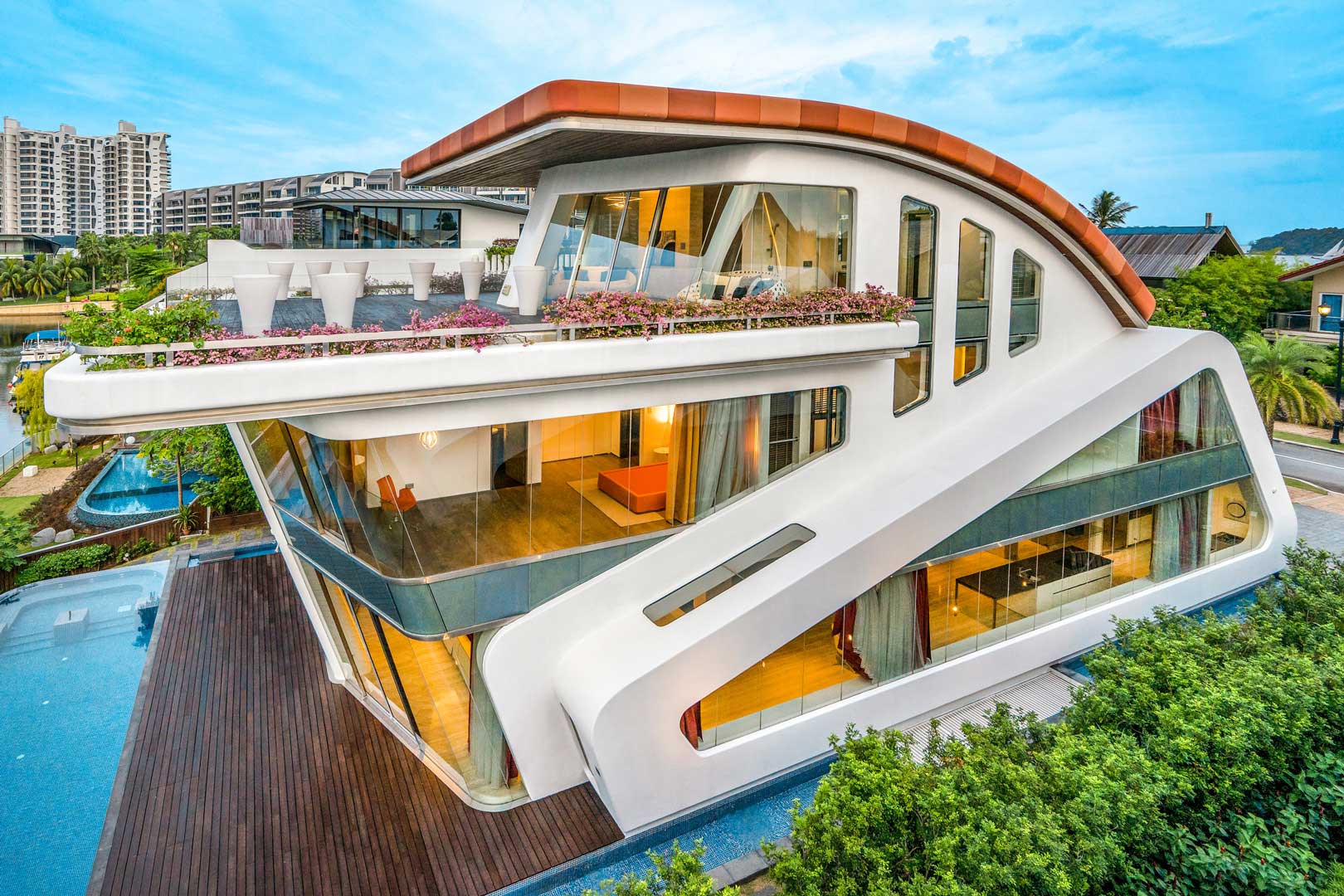 
This is one of two adjacent bungalows designed for the same client as Alba who had bought four blocks on Sentosa Island with the idea of building two pairs of villas. All four houses were designed at roughly the same time, although Vento and Mistral came slightly later.
Like Alba, the intention was to reference the sea with Vento and Mistral backing on to a canal opening and a harbour view of the water. Both houses come from a period when Massimo was playing with the idea of designing buildings with some affiliation to other objects. In the case of these two houses, the driving idea was to develop a form which conjured up the image of a powerful boat driving through the water. Although the houses are siblings, they are not twins and are quite different.

The form of Vento (‘wind’ in Italian) was inspired by the famous C42 cruiser which Massimo remembers from his childhood. With its powerful vaulting roof, thrusting ground floor terrace and second storey deck, together with the all-round glazing, Vento is strongly suggestive of a dynamic cabin cruiser, so powerful that we feel the wind on our faces as it cuts through the water. This theatrical quality is carefully stage-managed because, while the street elevation is certainly powerful ─ the vaulting roof, for example, begins on either side of the street entry with two arching ribs punctuated by highlight windows drawing light into the interior ─ it does not immediately reveal the drama to come. What does happen is a staged arrival sequence in which we cross a moat, as though leaving the land for a floating vessel. Inside the entry, the full view is further delayed by an entry vestibule with Massimo’s early sculpture, Feng (wind), a spiralling representation of a whirlwind set in a small fountain ─ and an acknowledgement of the client’s enthusiasm for feng shui.

The initial circulation through the house, then, is indirect, leading around the central stairwell, past the kitchen and dining area until the full view is eventually revealed.
The extensive use of timber and timber detailing in the interior and exterior reinforce the sense of a classic cabin cruiser. This is particularly so with the two guest rooms on the side which, with their relatively small, rounded, forward-slanting windows and intimate bathrooms suggest the cosiness of shipboard cabins.

If the guest rooms resemble cabins, the upstairs entertainment space mimics a grand stateroom in its glazed spaciousness, its glass walls thrusting outwards as on a cruise ship, with its extensive deck shaded by a generous overhang which has curved up in a powerful arc from the foundations. Downstairs, protected by the terrace above, the living space leads on to a deck, the pool, a jacuzzi and ultimately, to the private pontoon on the canal.

Timber and rounded forms (even the planter boxes inside Vento are rounded) are themes throughout, along with travertine ─ even the cupboard doors are clad in travertine to integrate them into the walls, again replicating the continuous surfaces found on the insides of boats.
Coming from Rome, says Massimo, where travertine “is a basic construction material”, this beautiful stone finds its way into most of MDL’s buildings.

From outside, Vento is an exciting, boldly simple, assembly of structural elements with its powerful orthogonal ground floor framework thrusting towards the canal, while its upper level is defined by the vaulting roof. Otherwise, the fully glazed walls ─ the structural elements are painted in pearl white with a metallic tinge to replicate the typical hull of a boat ─ de-materialise, allowing the interiors to merge with the landscape and leaving the structure of the building to inhabit the site in an assertively graphic gesture.
“So,” says Massimo, “they (Vento and Mistral) have this dynamic shape. And everything inside is designed to be representative of a boat. We don’t have rooms, we have cabins ─ everything is wood, the walls and the ceiling. I like the idea that we are pushing the envelope. You can look at things in a different way. You don't need to speak to the norm.”