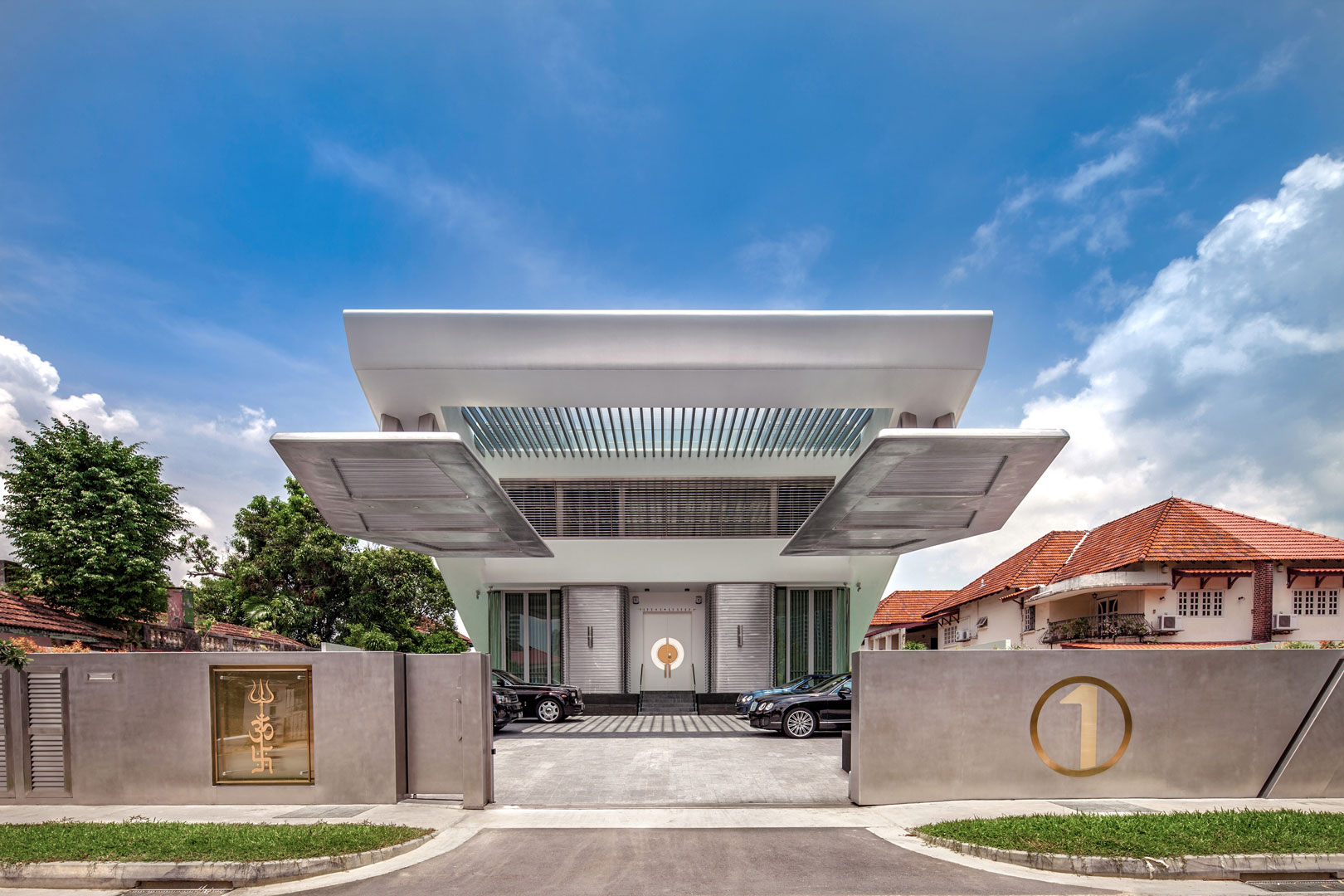 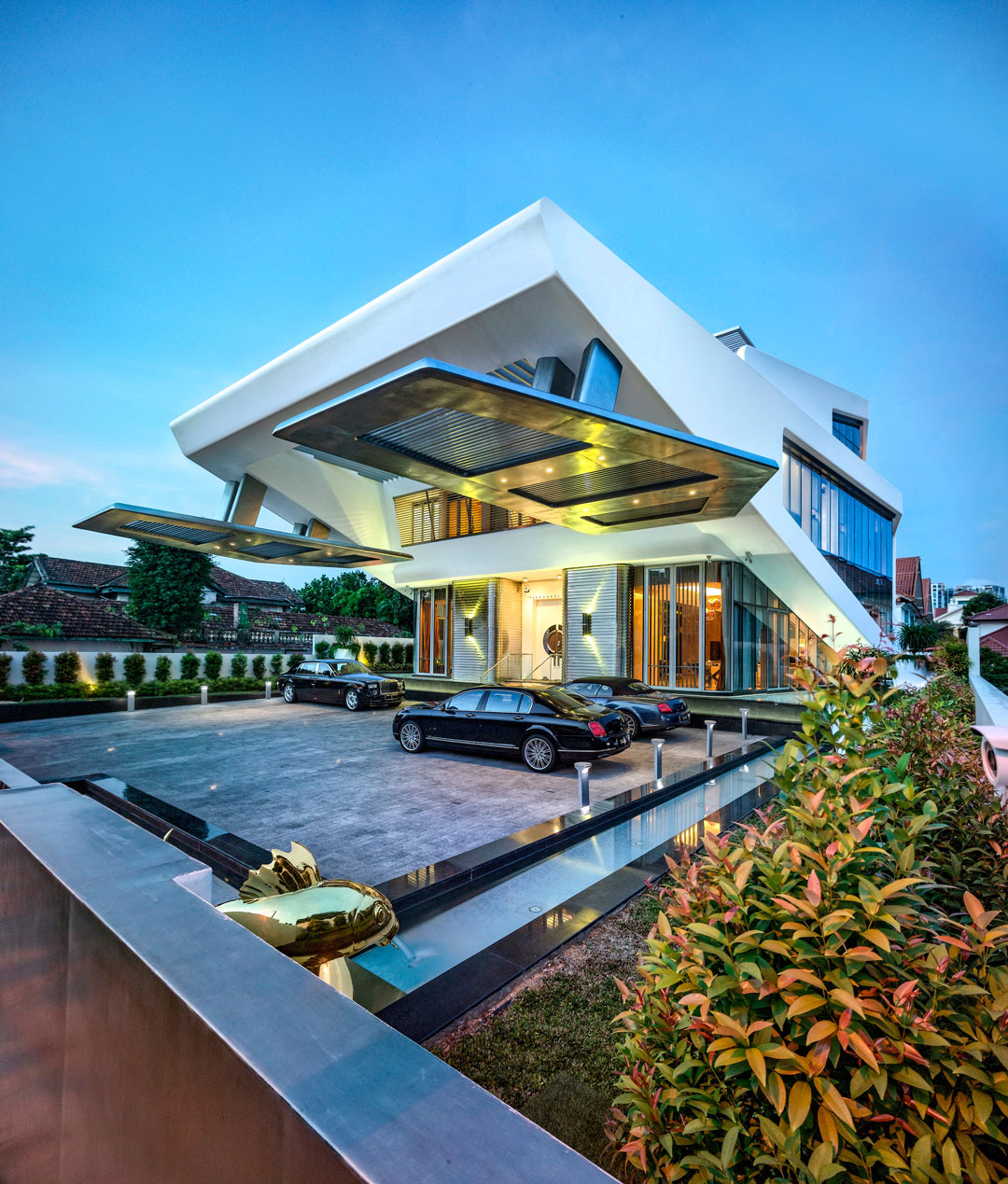 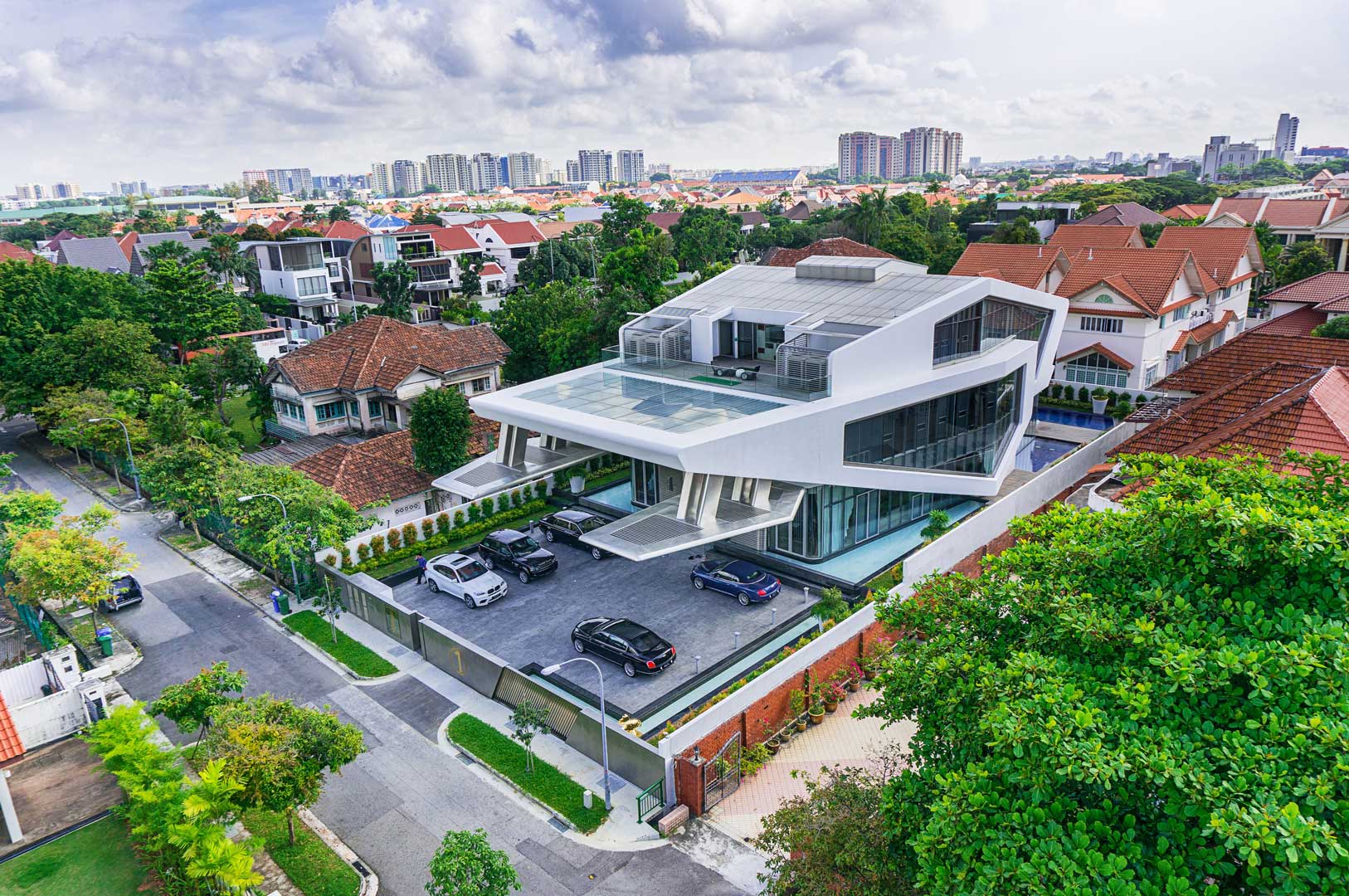 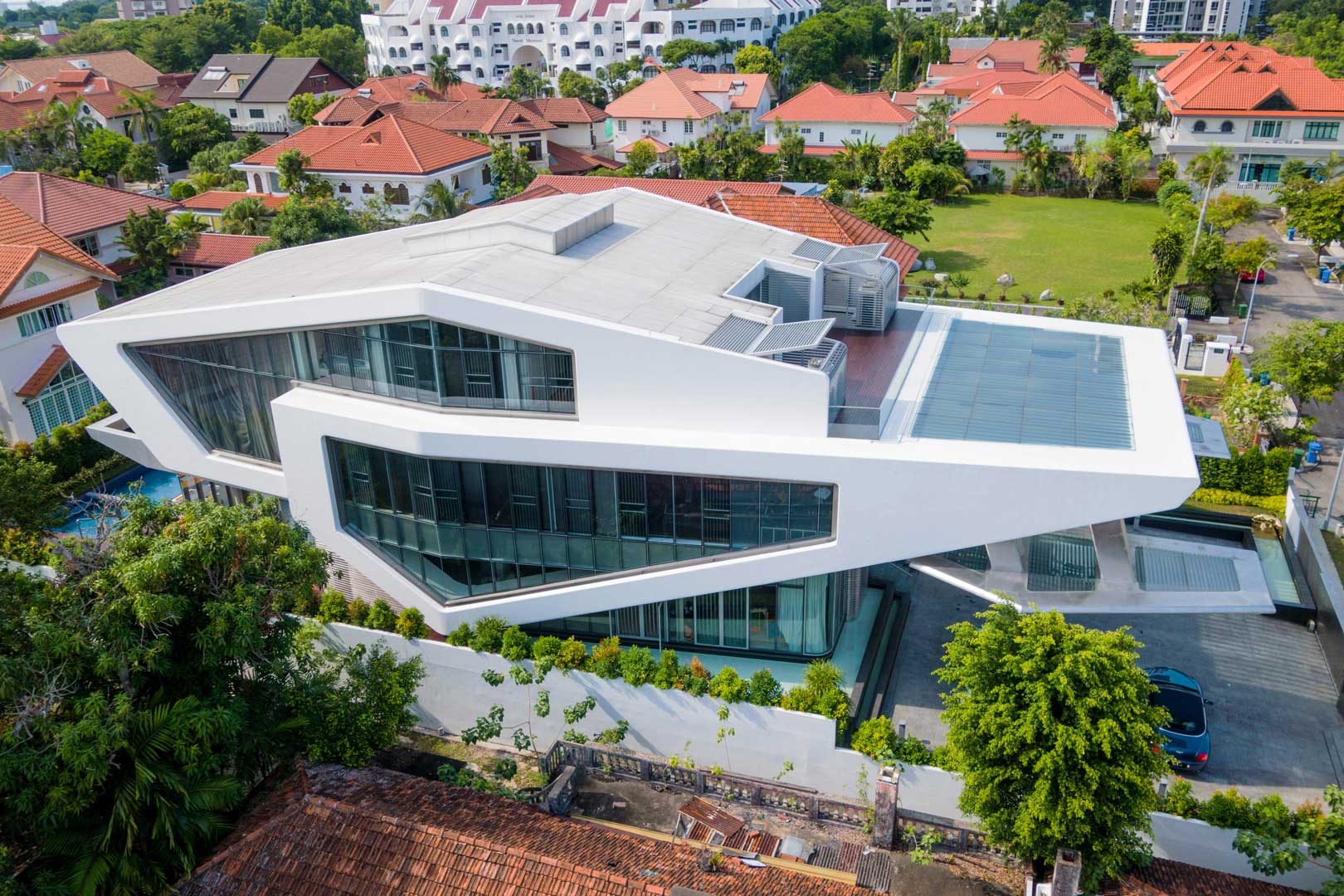 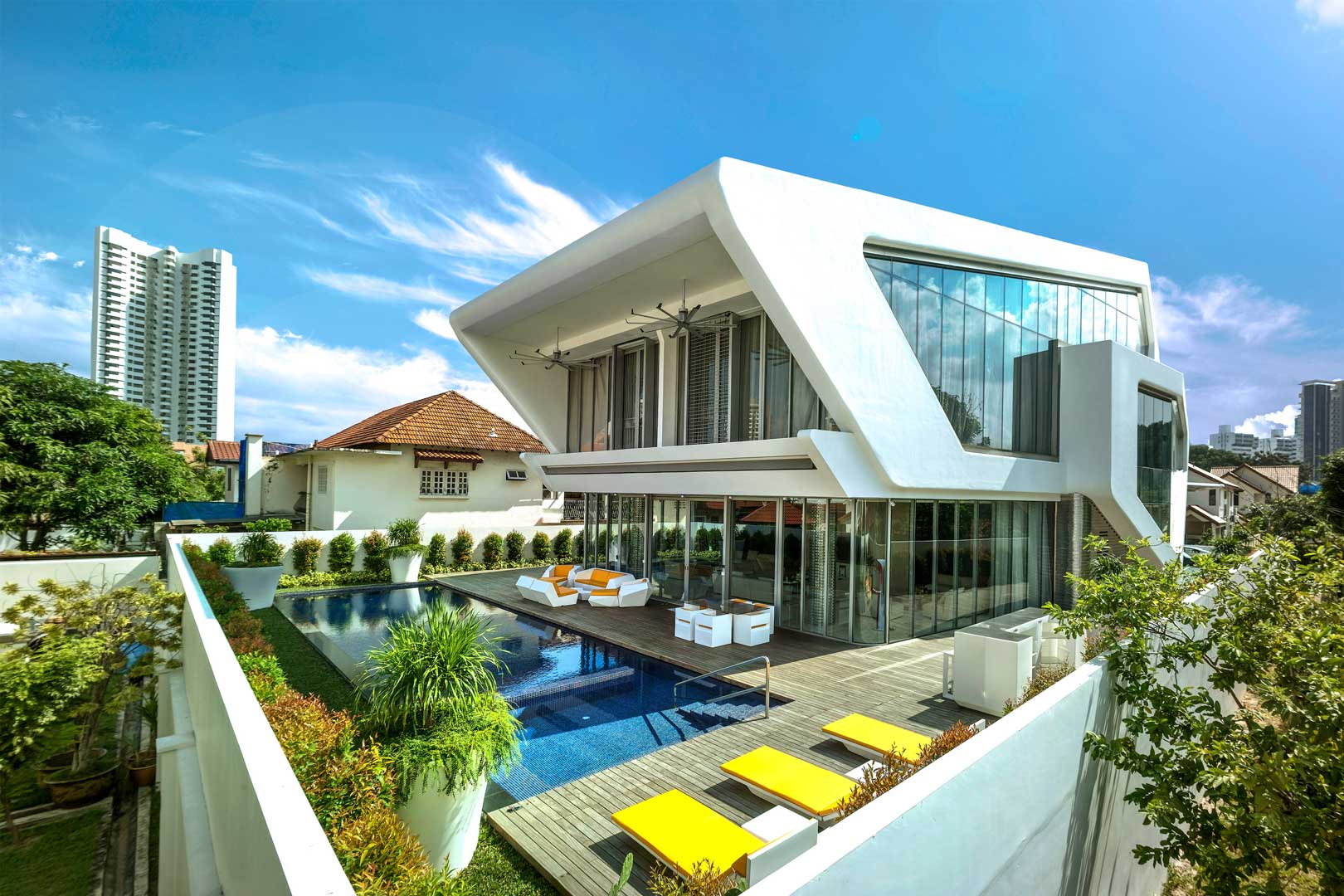 
This house is near Singapore’s east coast and set in a very suburban sea of red-tiled pitched rooves in a mix of classical and modern pastiche. The client wanted something very different from this suburban Singapore formula. He also wanted to maximise the floor space ratio and have parking for nine cars.

“The client,” recalls Massimo Mercurio, “looked around the studio and said he wanted something ‘cool’ and saw a model of a Lamborghini. I said I could do something better than that, something that looks like a starship.” While the house certainly does resemble a spaceship which has just landed, the development of the formal concept was actually a less descriptive exercise and more an exploration of abstract geometries triggered by the form of the Lamborghini. “Lambda,” says Massimo, “is a geometrical description of space.”
It is worth remembering that Massimo first trained as an engineer and has a strong interest in mathematics. Indeed, he previously tutored the subject at university level taking a special interest in the point of juncture between mathematics and physics. “It helps,” he says, “to explain how complex systems are evolving.” While Alba reflects MDL’s commitment to integrated design and embodied symbolism, Lambda exemplifies two other important features of the practice ─ its passion for pushing the limits of building technology and its delight in exploring how to keep dynamically opposed forms in a state of tense equilibrium, hence the ‘futuristic’ quality of many of its projects.

Massimo comments that he always found triangles among the most fascinating geometries, almost to the point of being esoteric. The model Lamborghini suggested two inter-related triangles which led to the final concept of two off-set shapes in opposition to one another, locked in an intense dialogue. This, in turns, feeds into the idea contained in the name of the house – lambda, λ, the Greek letter used to signify the notion of a wavelength, a triangulated formal composition of apparent opposites held in dynamic tension. This basic idea was then elaborated to pick up on the spaceship image – for example with the aero foil screens which cantilever 20 metres out to form the porte cochère and the protective canopy over the car parking underneath, the aluminum-clad roof with the extruded flaps at the rear of the attic sitting room, and the doghouse containing the lift overhang (looking like the air-intake of an engine room), all contribute to the image of a spaceship which has just landed or is about to take off.
The driving image was of a weightless building whose only structure would be the exoskeleton, a space frame containing the house itself. Two triangles cantilever off one another ─ one chamfered at the rear to add to the aerodynamic quality ─ with the whole structure seemingly balanced on a single point. The fact that the largely glazed walls of the house are set well back from the exoskeleton adds to the impression of this delicately poised composition of triangular forms. The framework also provided a solution to the challenge of generating a habitable attic. It remains within guidelines without any compromise to the formal character of the building, and it is large enough to contain a study (leading on to a cosy terrace with planters) and three other rooms, including a prayer room.

Generous eaves, along with the canopies, provide privacy and sun protection. At the same time, the house is effectively surrounded by water – a water feature in the forecourt (featuring Massimo's sculpture of a flying fish), water features running down each side of the house and an extensive pool at the back running directly off the living space and wrapping around one of the rear corners of the house ─ facilitating natural cooling.

The core of the house inside is the dining hall which rises over two storeys and is overlooked by a second storey gallery. Characteristically, the inside of the house contains many custom-designed elements which serve to unify the interior and the exterior in an integrated design scheme. The dining table is a ten-metre long monolith of white quartz with two stainless steel stems whose triangular profile references the exterior stanchions of the house. The customised bar counter with its travertine-clad face seems to grow out of the floor, while the triangulated legs of the pool table are another reference to the house’s outer form. Other customised elements include four differently coloured coffee tables made from duramite, and red, white and pink quartz, together with the large red table in the attic study.

The interiors are notable for their space and opulence. On the second storey, there are two double-height symmetrical bedrooms of equal size, differentiated by their palettes – one in classical beige tones, the other in silver and contrasting red, and with an elaborate false ceiling that features gold and silver leaf lining. The master bathroom is equally opulent with a large tiger onyx countertop and a Jacuzzi bath tub in the centre of the room.
Among the MDL projects so far, Lambda represents a unity between the exterior architectural form and the interior character of the house. The form of the house is expressed inside and by eschewing complicated furnishings, becomes the main theme of the interior design.