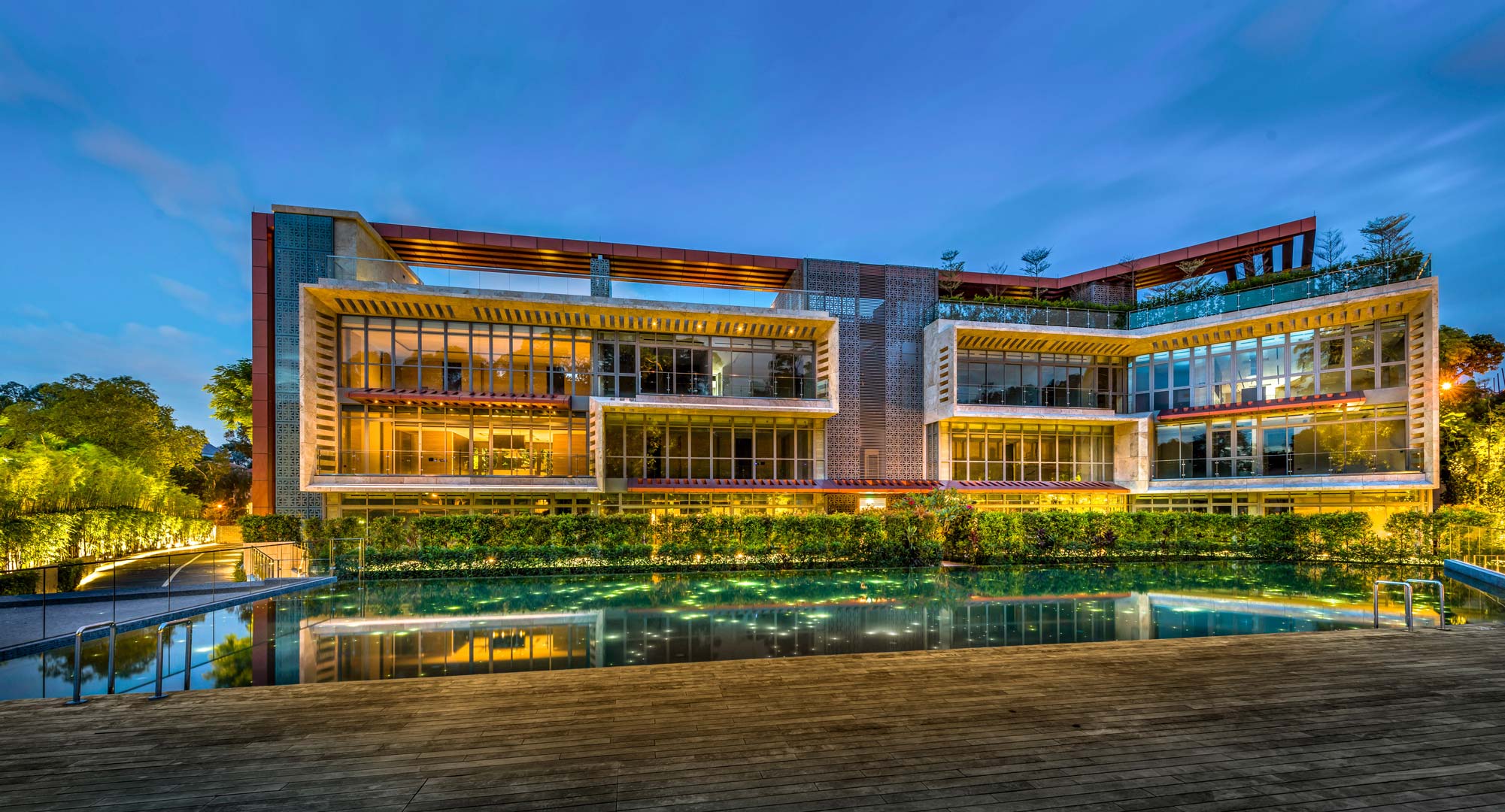 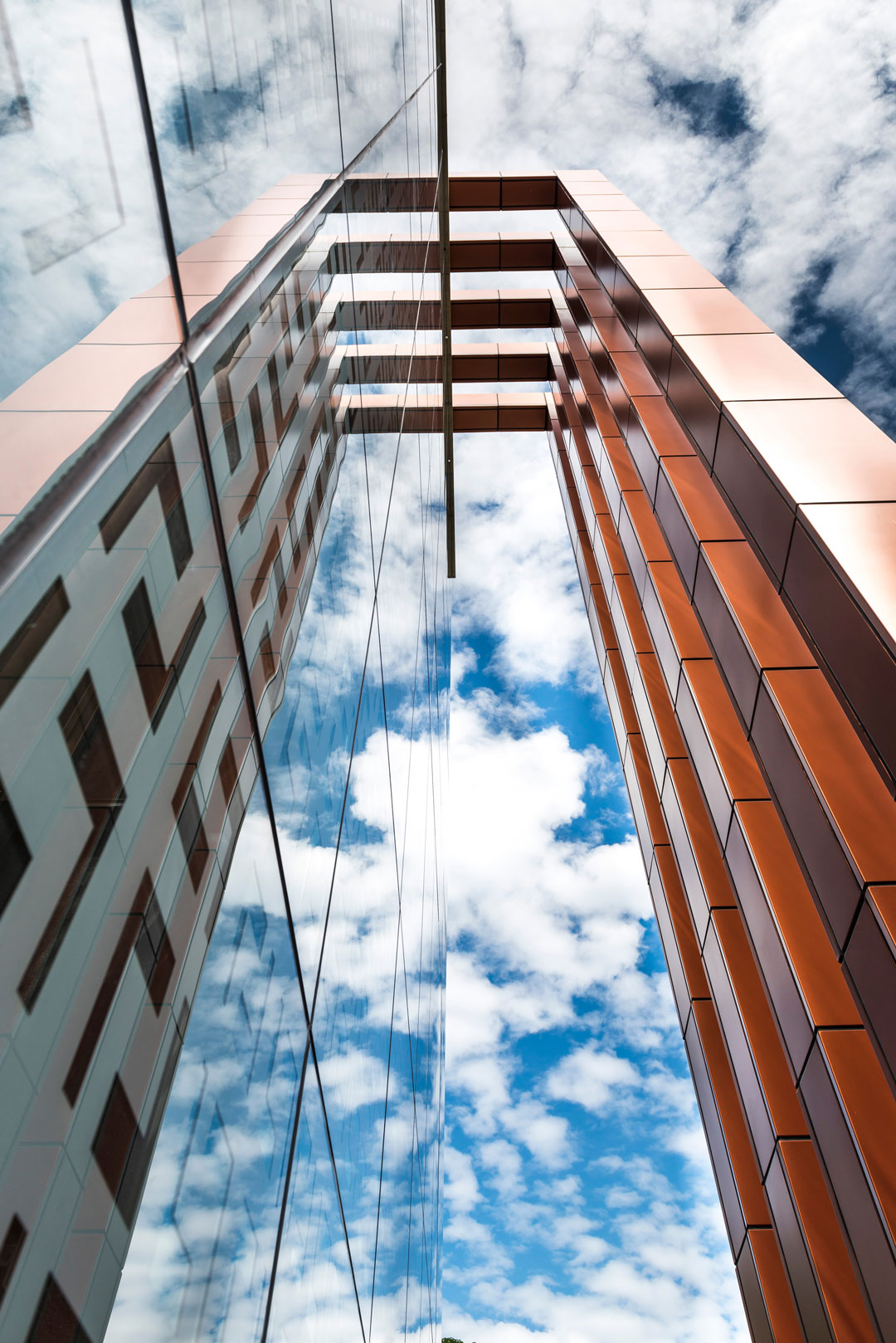 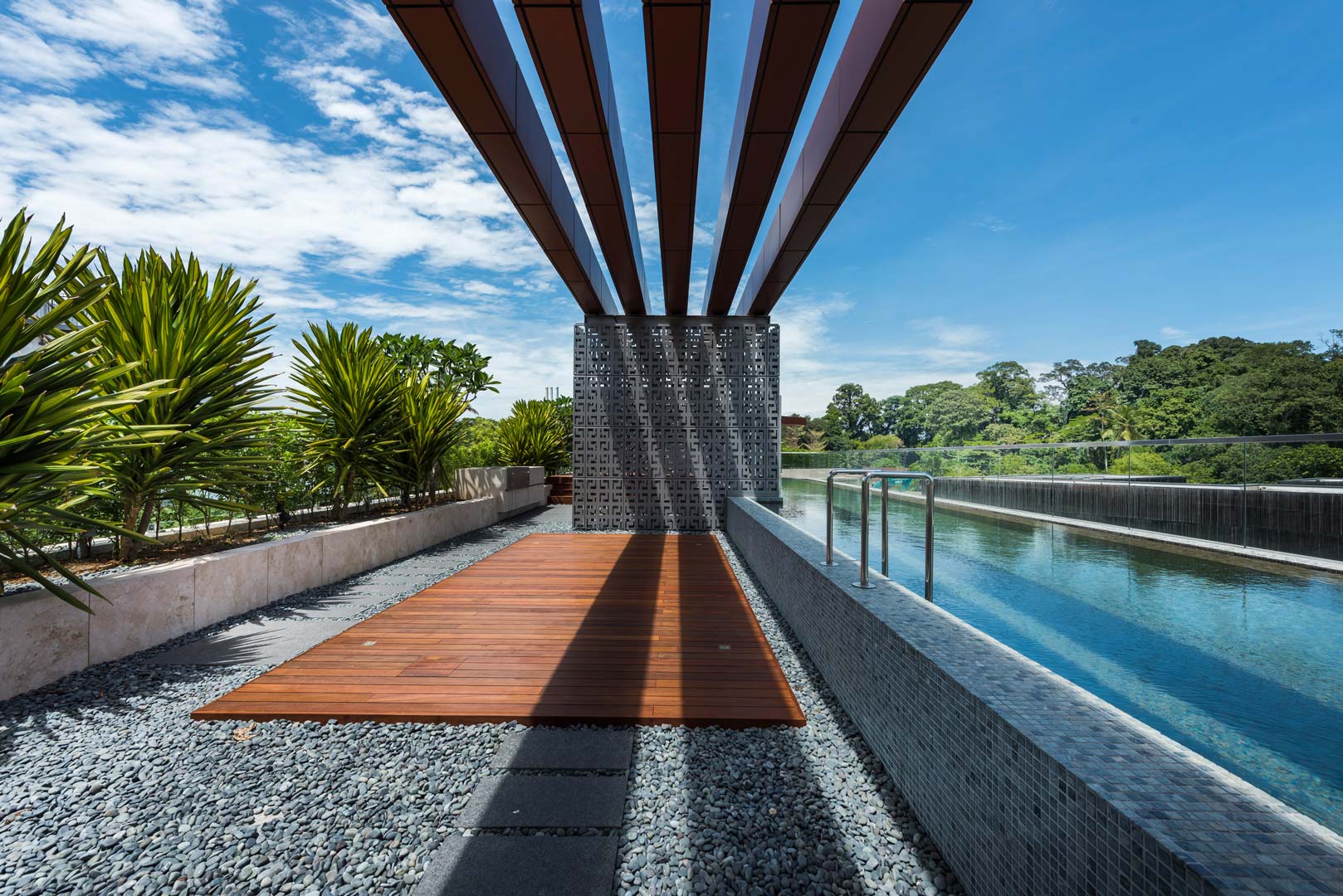 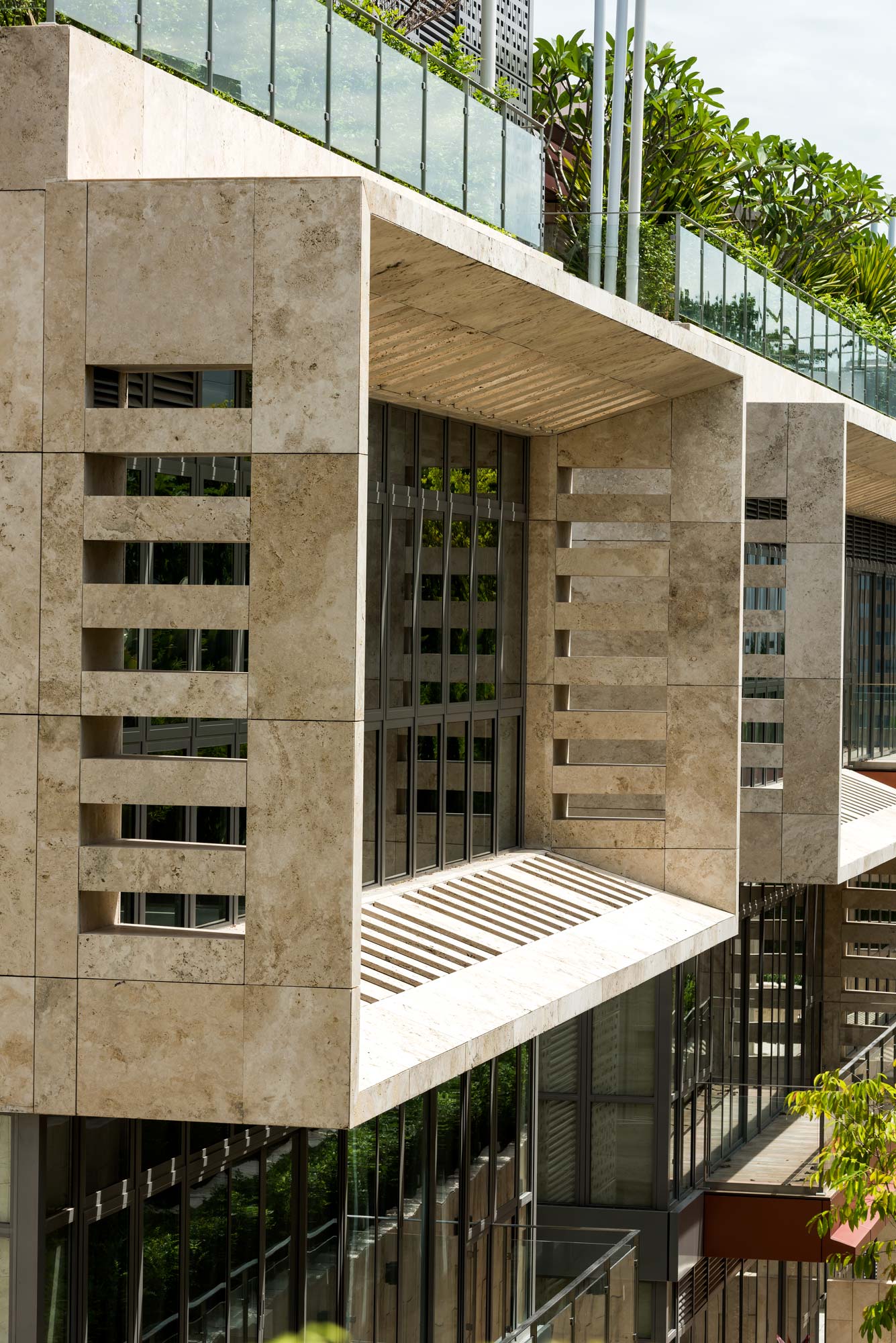 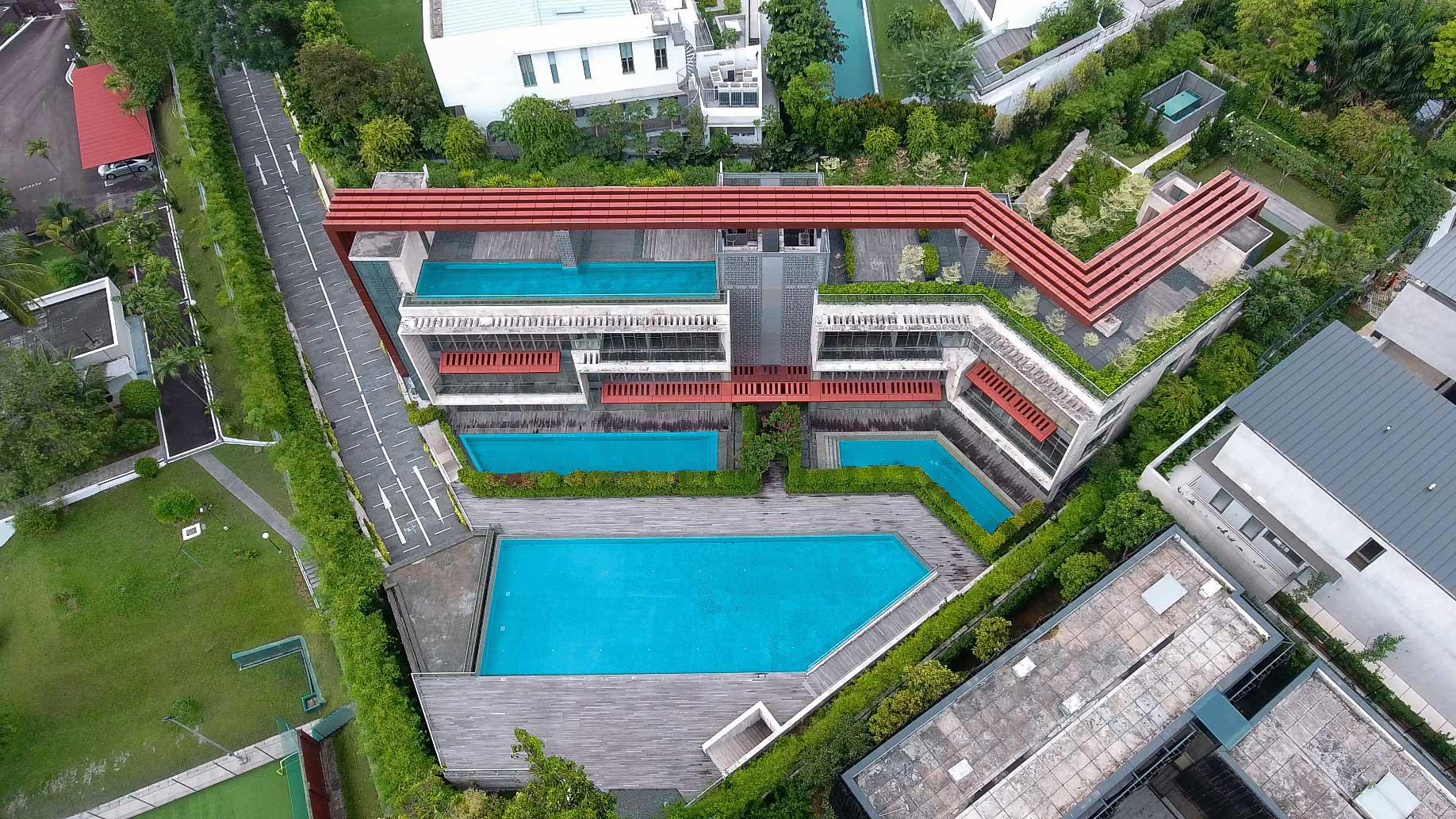 
This four-unit complex is in the Nassim Road precinct of Singapore, a highly affluent area known for its high quality Good Class Bungalows (GCB) ─ of which there are only about 2,500 in all Singapore, each of at least 1,400 land square metres across 39 designated zones, with Nassim Road being the most expensive.

The site itself is triangulated and gently sloping, and with a long access road limiting the amount of buildable land. So, in order to optimise the use of this very expensive plot of land, four ‘bungalows’ have been incorporated into one complex. The design challenge was to transform the experience of four connected units into one, so that each unit feels as if the occupants were living in a landed house set amongst lush and luxuriant gardens and where grand established tropical hardwood trees define the perimeter.

Somewhat paradoxically, this effect is achieved precisely by consolidating the four units into a single building, because this has freed up land for extensive landscaping and water features at ground level. At the same time, the architects have exploited the contour of the site to create an asymmetric plan as the second of the ground floor units dog-legs to run down one side of the triangle. This generates a ground plane rhythm to match the rhythmic quality of the elevation. In fact, the design claims a musical inspiration for the way the front elevation is composed.
Solids and voids, verticals and horizontals, and contrasting palettes are woven together like a piece of contrapuntal music where multiple voices work both independently and in unison.

A largely glazed façade is defined by a powerful interlocking composition of orthogonal travertine frames, communicating a surging rhythm which is pulled together into a single piece of music by the red bronze trellis which spans the entire length of the top of the building, providing shade to the rooftop terraces and mimicking a musical score.

Like any GCB, Nassim Quattro is meant to be a luxurious tropical refuge from the hectic life of Singapore. And like any other GCB, there is an appropriate transition from the busy public world to the tranquil private domain. This is the long, gently sloping driveway where driving into the basement carpark, one passes under a waterfall which is activated as occupants approach in their cars. Once inside, the basement divides into four self-contained basement areas providing parking, but also the normal basement amenities – laundry, maid’s room, an open void (drying area) and a lobby accessing a private lift.

The sense of living in a GCB is created by the direct connection between inside and outside, where the double-height living/dining space on the first storey, even for the upstairs units, seems a direct extension of the lush landscape outside - the combination of private pools and a large communal pool defining the site edge at the apex of the triangle create the sensation of living on water, where the lush bankside vegetation makes for a totally private refuge.

This connection between the inside and the gardens outside is sustained throughout the units, including bedrooms and bathrooms, with timber decks marking the transition to the garden.
Two units form the ground floor, each with its own private swimming pool. These units have two storeys (apart from the basement), with living, dining, wet and dry kitchens and two bedrooms on the first storey, with two further bedrooms on the second storey, and a void connecting the two levels above the living space. Then two units sit above, each with a fourth storey roof terrace with private pool, timber deck and planters. In these upper units, the lower floor contains the living/dining area, along with wet and dry kitchens, while the next floor is the private bedroom domain, again connected to the lower level by a void.

The extensive glazing and the easy open plan of the living/dining/dry kitchen create a sense of space, with ample natural light penetrating from both the front and the back of the units.