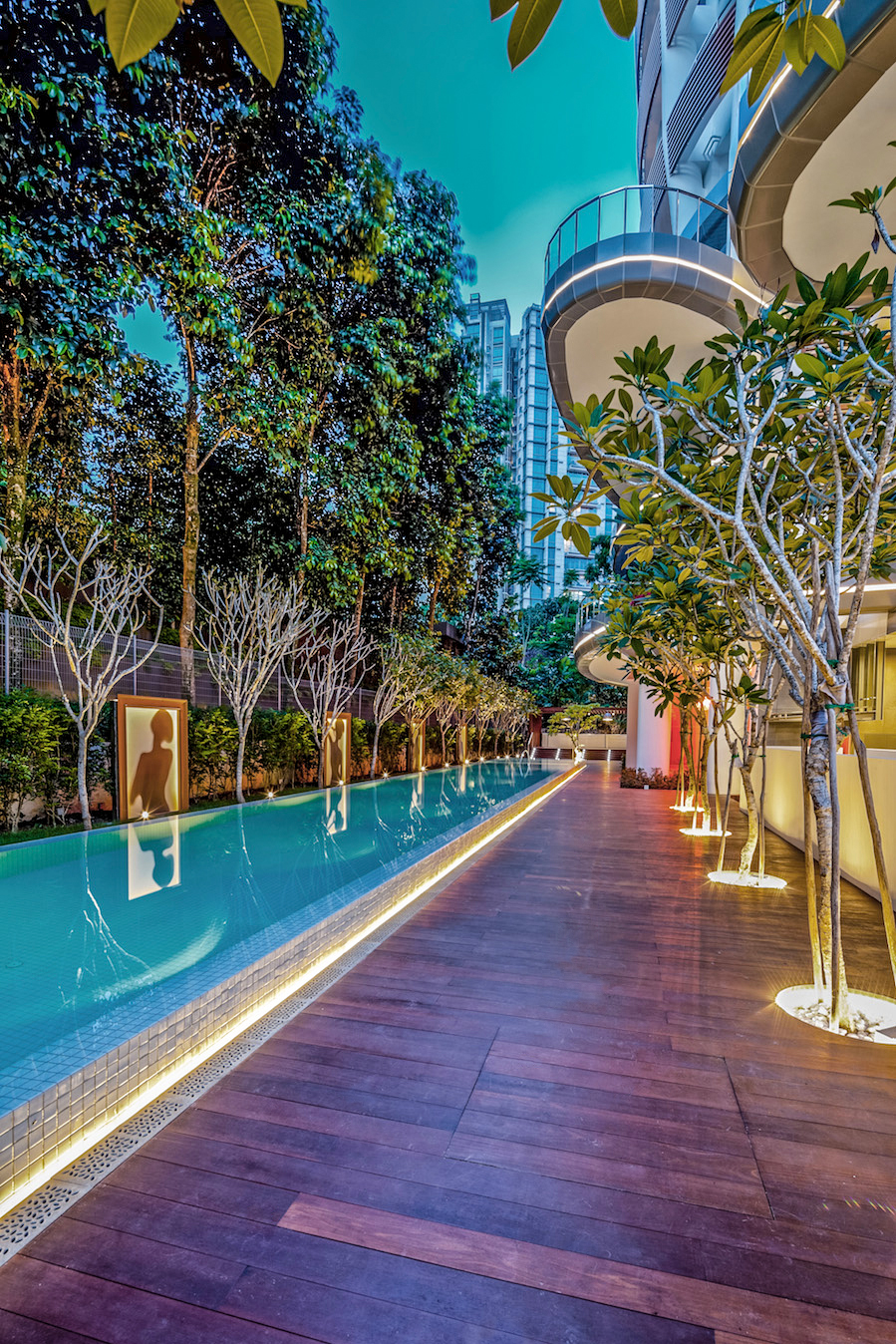 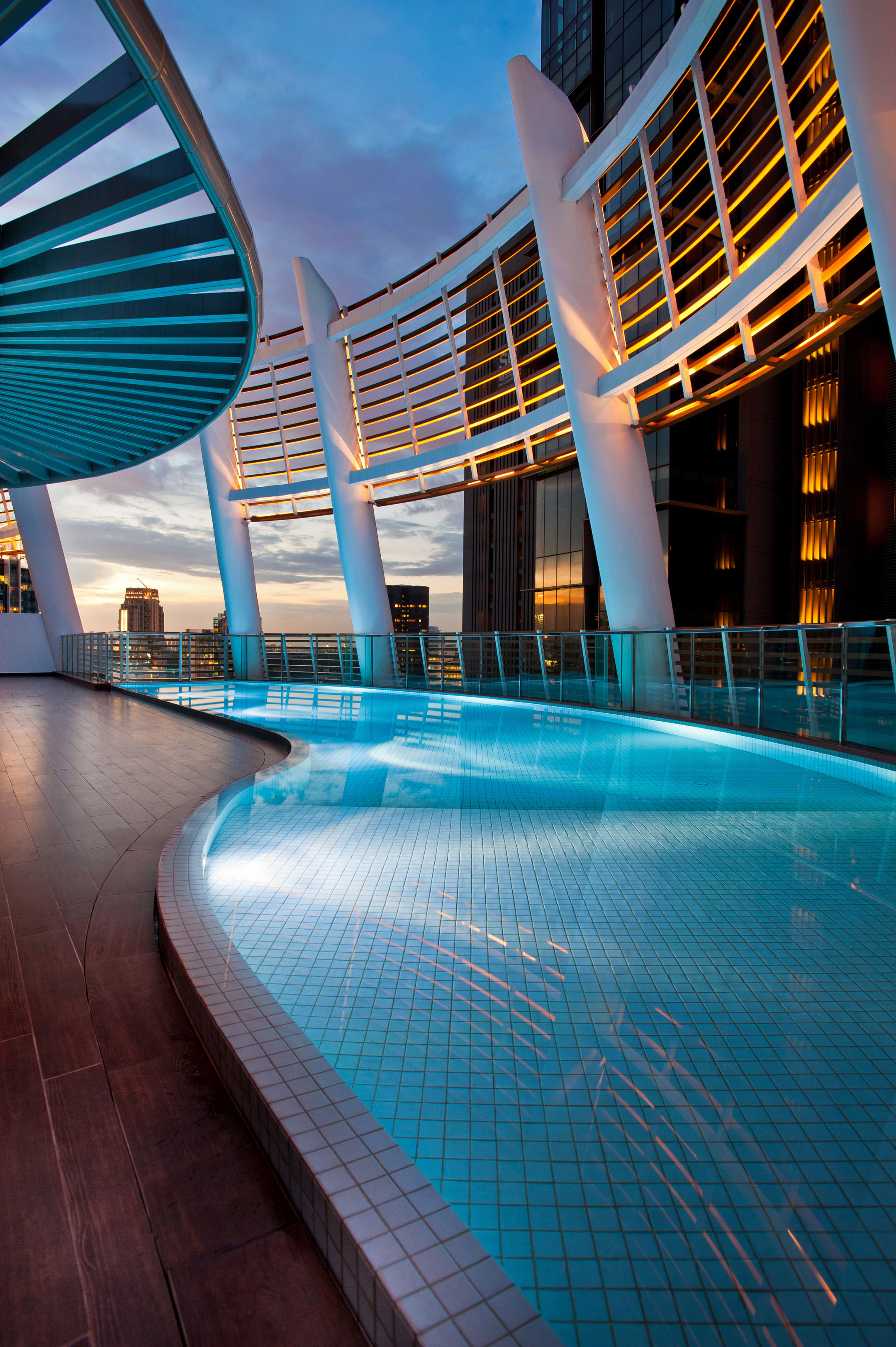 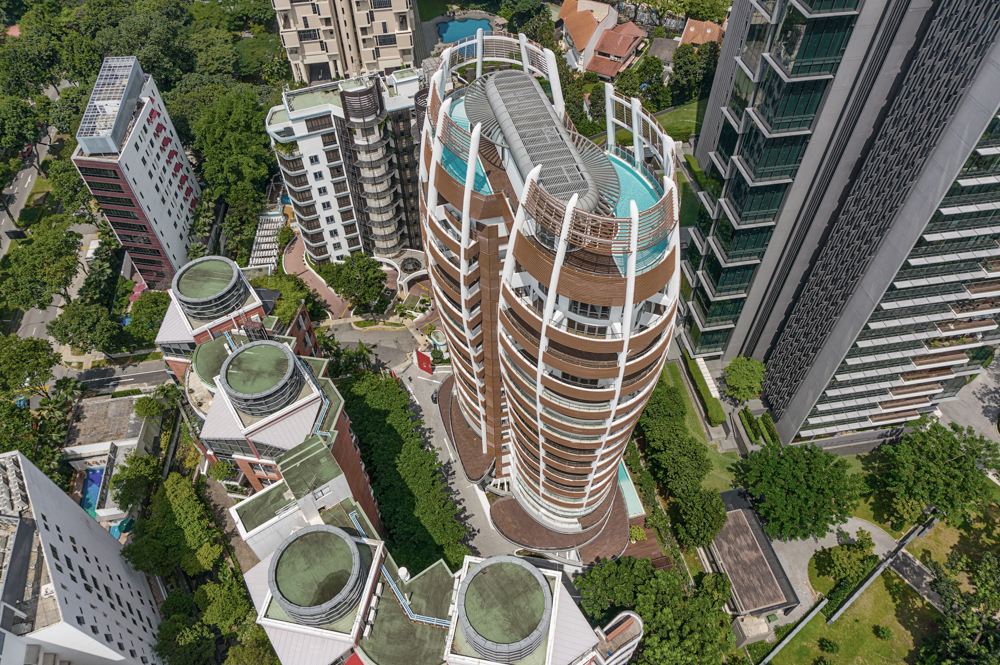 
This 16-storey residential tower is located in Grange Road, a prestigious area not far from the frenetically busy up-market shopping and entertainment precinct of Orchard Road. Nonetheless, it could be another world, because the Paterson Hill area is hilly and lush with tropical gardens and stands of large, mature trees. The building is also situated between two other higher towers, one of which is The Marq (24 storeys) which in 2011 set a new benchmark in luxury apartment living.
In particular, it signalled a new strategy to replicate the sense of living in a landed house with direct access to gardens and trees.

Arguably, all architecture is driven or defined by constraints, but rarely more than was the case with iLiv. MDL took over the project when the developer decided that the proposed form of the base building was not consistent with the proposed interior designs by Philippe Starck’s Yoo Studio, thus giving a new slant on the notion of inside-out architecture. MDL was asked to design a building which, in its form, would be equally unique, as expressive and powerful as the Starck interiors.
The site itself was highly constrained due to the proximity and height of the neighbouring towers, throwing up the challenge of designing a building with the character to stand out from its context but remain a ‘good neighbour’ and not be seen as demanding too much attention.

The tight site also raised the issue of how to generate sufficient floor space. This was exacerbated when the developer later asked for an increase in sellable floor space. MDL managed to creatively carve out an additional 20%. However, this extra area was mainly composed of bonus buildable gross floor area which did not grant more liveable space. Nonetheless, the size of the apartments became big enough to demand more rooms. Effectively this meant that two-bedroom apartments had to become three-bedrooms, and one-bedroom apartments two. The result was very small bedrooms, ameliorated to some extent by the curved profiles of the interlocking towers because, from inside, the curved walls create the perception of greater space.
Although the marketing of the building later suggested that its characteristic form had been inspired by the Calla lily, a tropical flower native to southern Africa, the shape actually owed more to the female human form ─ think Matisse’s ‘Blue Nude’. This results in two intersecting elliptical fuses, an intriguing visual conundrum which, true to MDL’s philosophy, also hints at an underlying symbolism ─ perhaps the symbol of infinity or perhaps the number eight which is propitious in Chinese culture. The highly sensual, volumetric and curvilinear external form of the building complements the interiors as required by the brief, but also serves to neutralise the building’s scale disadvantage vis-à-vis its neighbours.

The organic form of the building ensures that every floorplate is different. One elliptical stack consists of maisonettes containing two bedrooms and a double-height living/dining space, while the second stack consists of three-bedroom and studio apartments. There are also two penthouses, each with its own spectacular curving pool. The 1, 2 and 3-bedroom apartments range from approximately 102 square metres to 279 square metres, while the two double-height penthouses are approximately 306 and 325 square metres respectively.

The ellipses have equal perimeters at their core, but the external perimeters (defined by the balconies and their planters) vary, swelling out initially, only to shrink sharply over the last three storeys. The voluptuous form of the building is accentuated by expressed curved ribs which lead the eye upwards to the gently folding conclusion above the roofline. In counterpoint with these vertiginous ribs, is a horizontal lattice of brown louvres providing privacy and sunscreening, and accentuating the distinctive form of the building by creating a sense of unity to the facade.

Also adding to the sensuality of the form is the way the first three storeys of the building surge organically in and out, cantilevering out as far as six metres and providing a dynamic canopy for the porte cochère. From inside the apartments, these apron-like forms serve to edit the views and, combined with the balcony planter boxes, create a sense of being in a house among the trees.
Typically for MDL, iLiv@Grange has a unity of interior and exterior form with the dynamic sensuality of the building’s outer form continued inside, ensuring constant visual stimulation. Also typical is the way the building has a powerful sculptural presence, its coherence driven by the interaction of vertical, horizontal and curvilinear elements. The sculptural agenda is supported by an early example of a piece of sculpture at the entrance to the building. This was commissioned by Metakaos, the artistic arm of MDL, who proposed it for iLiv. In this case, through the Metakaos art gallery, they acted as agents bringing artist and client together. Soon, however, the architecture and the art would become integrated and part of a single, over-arching process of design. In fact, it was here at iLiv that MDL’s unique practice began, combining design, art and architecture.

Just as the building aims to simulate living in a landed house with views out to its own private garden, the design overall was driven by the model of the tropical house, aiming to have the structure respond to the climate with minimal reliance on air-conditioning. The glass façade is extensively protected from direct sunlight. The horizontal louvres reference the shutters of a traditional tropical house, their functional role amplified by a sense of cultural context. The apartments are further shaded by being set back beneath the curving extruded terraces. Energyefficient glazing employs air gaps between the double-glazing with tinting to reduce glare and heat gain. The common areas are largely naturally ventilated and lit, with recycled timber used in interior spaces and the common pool deck.